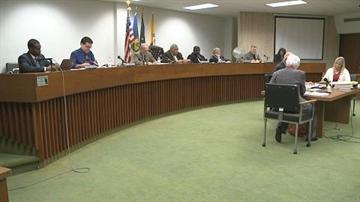 On Monday night, the South Bend Common Council, minus Ann Puzzello who was home recovering, voted to increase the salary of the City Clerk, the Mayor, and themselves by two-percent.

It is the first increase in pay for the Common Council in four years. The increase brings council member wages up to a little more than $17,000, about $300 more than they currently earn.

The bump in pay came with some opposition. Council members White, Kirsits, and Varner all voted against the measure.

Dr. Varner was also the only dissenting vote when it came to increasing the pay for the position of mayor of South Bend.

Mayor Steve Luecke hasn’t taken a dollar more than what he was being paid four years ago. He froze his wage in 2008 at $94,633 despite the Common Council voting to increase his pay to $96,526 that same year.

In 2009 and 2010 the council did not change the rate of pay, and Luecke actually donated five-percent of his gross pay back to the city.

When asked why he did all of this, he said it was because he wanted to lead by example when times were tough financially for the city. “We were asking city employees to take zero-percent increase, so I felt it was appropriate that if I was going to ask my front line workers to not take an increase that we should do the same for the mayor’s position,” said Luecke.

In 2011, his final year as mayor, Luecke did not take an increase in pay and he did not donate either.

Monday night, he asked the council to increase the salary of the mayor by just two-percent, or about $2,000. Mayor-Elect Pete Buttigieg was not present at the public meeting, but members of his transition team and staff were.

Dr. Varner says, it would have been nice to hear Buttigieg explain why he felt it was necessary for his position to receive a pay increase. “I would be very willing to support an increase in the [mayor’s salary] when they see some results; particularly since we have a new mayor,” said Varner.

A member of Buttigieg's Transition Team contacted ABC 57 News after this story aired.

"Accepting a raise in this economy doesn't feel right to Pete, so he will be donating it back to the city," said Mike Schmuhl, Mayor-elect Pete Buttigieg's Chief of Staff.

South Bend’s City Clerk, John Voorde, was also approved for a two-percent raise. The vote was unanimous. Varner said, Voorde was underpaid and deserved the raise.