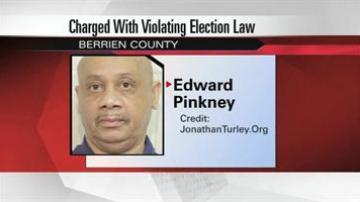 According to the prosecutor, James Cornelius wanted to recall Mayor Hightower because he voted against putting an income tax on the November 5, 2013 ballot.

The election commission required 393 signatures on a petition in order to hold a recall election.

He collected enough signatures and the recall election is scheduled for May 6, 2014.

Because of that investigation, Pinkney is accused of changing the dates people signed the petition to a later date and time and causing them to be submitted or aiding in their submission.

The prosecutor says election forgery is punishable by up to five years in prison.

Pinkney is also charged in six counts of allowing the same person to sign more than one time and then asserting the he did not allow that to occur. Each count is a 90-day misdemeanor.

Cornelius is charged with one count of permitting someone to sign a petition more than once and permitting signers to sign out of his presence, a 90-day misdemeanor.

An arrest warrant for Pinkney was issued on Wednesday, but he has not been arrested.

The Berrien County Clerk said 392 signatures were required in order to start the Mayor recall process.

In February, the clerk counted 402 valid signatures. However, now officials say a number of those signatures do not count.

So it is possible that Pinkney and Cornelius never collected enough signatures in the first place.

It is still unclear whether or not the May 6 election will take place.