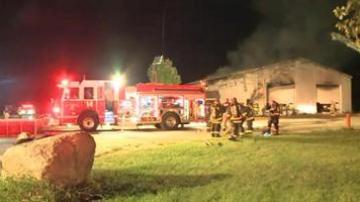 “We received the call this morning about a car on fire up next to the building and the building catching on fire," Penn Township Fire Battalion Chief Brian Kazmierzak said.

It was an unwelcome wake-up call.

Not only for firefighters, but for the owner of Laidig Concrete.

“I got the call around this morning around six o’ clock that said my business was on fire,” Owner Matt Laidig said.

Matt Laidig is in shock. Watching his business getting soaked by fire hoses. It left charred metal, soot and more questions than answers.

With Laidig asking why, investigators are asking who parked this car suspiciously close to the business.

“At this time we’re treating the fire as suspicious due to the fact that the car was up against the building," Kazmierzak said.

The flames started in the car, now burned beyond recognition, and quickly spread to the building. Firefighters say that is no coincidence.

It shouldn’t have been there in the middle of the night like it was,” Kazmierzak said.

With 30 years in the concrete business and 20 employees to look after, Laidig says he's not letting one fire shut him down.

“We’re trying to keep business going as usual here and trying to find out first, the total damage and hopefully we’ll find that out later on today and then I’m going to have to figure out how to carry on,” Laidig said.

Hoping to carry on and move forward, despite so many unanswered questions tonight.

“But we’ll still be in business I just don’t know whether we’ll rebuild or get another building someplace or what we’ll do. I’m thinking we’ll rebuild though,” Laidig said.

Officials say this fire is suspicious for a number of reasons including why that car was parked next to the building and how the fire started. Penn Township Fire investigators say they are still looking into how much damage was done to the building.