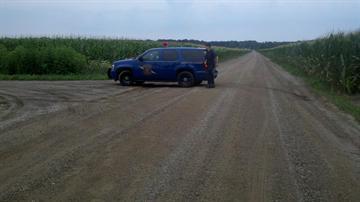 GALIEN TOWNSHIP, Mich. – A four-hour manhunt in southern Berrien County is over and police didn’t get their man. The Berrien County Sheriff’s Department said that suspect is still on the loose.

At 10:15 Wednesday morning police were dispatched to a ‘shots fired’ call on the 4600 block of Kinne Road in Galien Township. The home is owned by Berrien County Animal Control officer Rich Erickson.

Erickson told ABC 57 News; while on duty, he returned to his home and found an unarmed intruder outside the home. Erickson said he fired off a shot from his weapon into the tire of the suspect’s car and the suspect fled into a nearby corn field.

“It’s scary it could have been us,” said Abby Smith, a neighbor of Erickson. Smith said the rural area has been safe since she’s lived there. “Normally we can leave our windows open and unlocked and we don’t have to worry about anything.”

Berrien County Police led a three-hour manhunt with K-9 units from Michigan and Indiana. The search scanned neighboring fields around the home.

By 2 p.m. the search had been scaled back and a police perimeter was called off. As of Wednesday evening police were still tracking down leads into the suspect’s whereabouts.

“You have a right to defend yourself and your property,” said Robert Boyce with the Berrien County Sherriff’s Department about Erickson.

Berrien County Sheriff Paul Bailey explained to ABC 57 News that an investigation into Erickson’s actions will be the same as an officer involved shooting. Even though Erickson was on his own property at the time of the incident he was on duty and in uniform.

“It’s just scary,” said Smith. “It’s so scary not knowing and then he’s out on the loose.”

Berrien County Police said the home invasion could be connected to several others in the area recently.

Police said the last indications were that the subject had left the area. The suspect they were searching for is a man in his late 20s, 6-foot-2, with brown hair and a goatee, wearing blue jeans.