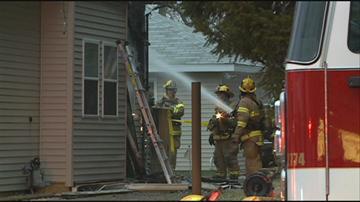 Fire crews were received multiple calls alerting them to a fire at the home on the 600-block of Ironwood.  Three companies of the Mishawaka Fire Department were called out to put out the flames.

“We live right down the road and we were coming down here and taking a left hand turn on Ironwood and we saw all the smoke and the commotion and everything,” described Nicole Phillips, who saw smoke pouring from the house.  “It was coming off the back of the house, it was just a big huge smoke cloud, black smoke.”

Right across the street crowds of onlookers at nearby businesses and restaurants rushed to find help.

Firefighters were on scene in minutes and found the back of the home covered in flames.

“We had quite a bit of flames on the exterior of the structure on the backside of the house,” explained Lt. Ian Jarrett of the Mishawaka Fire Department.

In the middle of rush hour, Ironwood drive was completely shut-down from Lincolnway East to Milburn Avenue.  Traffic was stopped, but not just to make way for firefighters.  The fire knocked out power to nearby streetlights.

"Fire was on the exterior of the structure, dropped the house drop for the power to the house which then tripped a breaker or something for the stoplight at Milburn and Ironwood," Lt. Jarrett explained.

Traffic was rerouted for around two-hours until crews could restore power to lights and until firefighters could clear the scene.

Nobody was inside the home at the time of the fire and no firefighters were injured.  The cause of the fire is still under investigation.