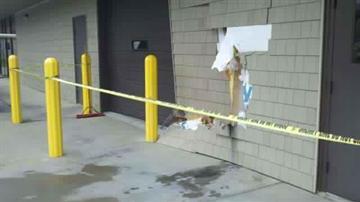 GOSHEN, Ind. – A Goshen Police Officer shot and killed a man after a police chase that ended in a crash Sunday night.  Melvin Bledsoe, of Goshen, was pulled over by an Elkhart County Sheriff’s deputy on State Road 15 near County Road 40 around 10 p.m.  According to the officer Bledsoe pulled over then drove off as the officer approached on foot.  Sheriff’s deputies chased Bledsoe into Goshen where Goshen Police joined the chase.  Eventually Bledsoe rammed two police vehicles and turned into the parking lot of Faubion Plumbing Heating & A/C at the 713 E Lincoln Avenue.

“When I first spotted him he was right here, right here as you just pull in right here doing donuts in the parking lot, then I heard two gunshots and I went back inside,” described Teresa Ratcliff, who lives next door.

According to witnesses Bledsoe’s truck slammed into a building and Bledsoe continued hitting the gas, even burning the rubber off of his tires.  Shortly after the crash Bledsoe was shot and killed by a Goshen Police officer.

“Basically the tires were spinning and the smoke off the tires filled the entire building,” described Greg Faubion, who owns the building Bledsoe crashed into and was called to the scene when police believed the crash might have sparked a fire.

Faubion returned on Monday to survey the damage and recounted what the scene was like the night before.

The impact left a gaping hole in the wall of the building.  But, Faubion said his focus was on Bledsoe’s body which was still on scene against the building.  There were still traces of blood on the front sidewalk Monday morning.

“Still hasn’t sunk in,” Faubion explained.  “I feel sorry for the man’s family, for the loss..this can be repaired, we’ll fix the building back as good as new..he’s got loved ones, they’ve lost a family member.”

Bledsoe did have a lengthy criminal record in Elkhart county, spannig the past twenty years, including two DWI's, contempt, battery with a weapon, three marijuana posession arrests, and four charges for skipping child support payments,  with the Elkhart County Sheriff’s Department.  He was pulled over Sunday night for driving over the center lane, investigators still don’t know why he ran from police.  But, Bledsoe’s history didn’t matter to Faubion or the other residents who now have to live and work at the scene where Bledsoe was killed.

“We had a person that was killed on the property and that’s something we’re always going to live with here,” explained Greg Faubion.  “We’ll learn to live with it, it’s just part of life I guess.”

The Indiana State Police are investigating the shooting, which is standard protocol.  The spokesperson for the State Police explained that it could take up to a week for the results of the investigation to come out.  An autopsy was scheduled for Bledsoe on Monday, no results have been reported yet.  The Goshen officer who shot Bledsoe has not been named and is on paid leave until the investigation is over, which is standard procedure for officers involved shootings.