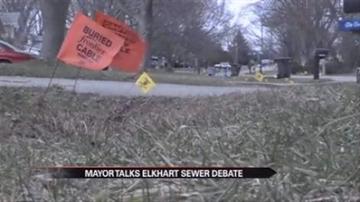 ELKHART, Ind. -- Elkhart’s mayor held a press conference Friday to address the sewer issues between the city and the residents of Valley View.

The city wants the residents outside of the city to sign a new contract for sewer service. The city says any homeowner who doesn’t sign the new contract will be disconnected from the city’s sewer system.

Mayor Dick Moore made it very clear that the city is not willing to negotiate .

The mayor says that the reason this new contract has been drafted is because the old sewer agreement that was in place has expired.

He says that under this compact, Valley View residents will pay a flat rate of $50 a month.

He said he doesn't see what all the fuss is about.

Mayor Moore believes that the dispute with Valley View is about more than just paying the monthly fee.  He says homeowners are worried about the languange in the contract that pertains to annexation.

The Mayor says there are not any plans to annex those residences at this time, but that the language in the contract will not change.

Commissioners say Mayor Moore did respond to a letter they sent him, but he has yet to address what they deem to be the most important issue, the residents' health.