UPDATE: New information on the events leading up to double shooting 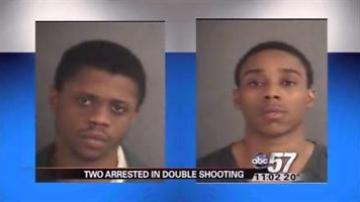 SOUTH BEND, Ind.-- On Monday, ABC 57 News learned more information about the events that led up to the double shooting on South Bend's west side.

Two suspects were arrested on Sunday night in connection with 19-year-old Alejandro Tinoco's homicide and the shooting of 19-year-old Jazmin Conlee.

26-year-old Charles Moore and 21-year-old Jermon Gavin were arrested on suspicion of felony murder and robbery.

But what led Moore and Gavin to Tinoco's home?

The court documents released on Monday  tell of a drug deal that ended in murder.

In the documents police say Tinoco-who eventually died from a gunshot wound-was known for selling Marijuana.

Last Wednesday, police believe four young men including Gavin and Moore were riding around in a silver Pontiac when they decided to go to Tinoco's home on Adams road.

The court papers say once they arrived at the home, Gavin sent Moore and a teen  to the front door.

The teen then tried to buy Marijuana while Moore hid with a gun.

The teen told police Tinoco tried to shut the door, but then Moore burst in, shooting Tinoco in the head and Tinoco's girlfriend.

For the first time, this paperwork also revealed the extent of the girlfriend's injuries.

Both were unconscious and breathing when police arrived.

As of Monday, Moore and Gavin both faces robbery and murder charges.