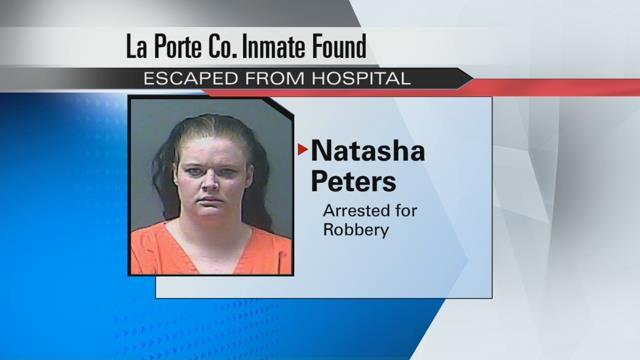 The woman who fled from South Bend Memorial Hospital on Saturday was taken into custody on Sunday.

Michigan City Police received a tip from a citizen and located Peters near the intersection of 8th and Pine Streets.

Peters was an inmate in the LaPorte County Jail and was granted a furlough to deliver her child.

She was taken to Memorial Hospital because of a high risk childbirth.

She fled the hospital on Saturday.

Peters was initially transported to the Michigan City Police Department but will be returned to the La Porte County Jail.

Officials are continuing their investigation into Peters’ flight from South Bend Memorial Hospital specifically tracking leads for anyone that may have assisted Peters during her time on the run.

La Porte County Sheriff John Boyd commended all of the law enforcement cooperation that went into this case.

"Our investigators worked through the night and into this morning following up on leads and information as it came in. We were also working closely with the La Porte County Prosecutor's Office," said Boyd.

Police said additional criminal charges will be filed against Peters.

The matter is still being investigated by police.