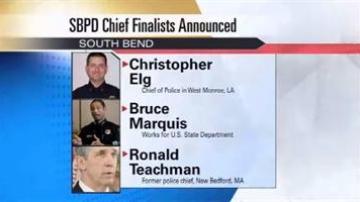 SOUTH BEND, Ind. – The mayor’s office has released the names of the three people who are finalists for the chief of police position with the South Bend Police Department.

The finalists are Christopher Elg, Bruce Marquis and Ronald Teachman. Each finalist will interview in person with Mayor Pete Buttigieg, although the mayor's office did not say when that is to take place.

The mayor’s office says they received over 60 applications for the position.

"Stability is needed and to continue to keep us in this process going right now is not healthy," said Common Council Vice President Oliver Davis in response to Thursday's announcement.

ABC 57 took a closer look at each of the candidates' backgrounds. We learned these are three very qualified, well-educated candidates. However, at least one brings with him a controversial past.

The news came as quite as surprise to some council members. In fact, ABC 57 News was the one that told them about the major announcement Thursday night.

"We found out today who was on the search committee. At the same time, we found out who the final three names were," said Davis.

Council members are concerned that the mayor did not have a transparent search process like he promised when the search began.

Another issue council members have is that this is costing the city more than the $1 price tag consultants said they would charge.

"It's totally misleading. His company has charged $7,200 to the City of South Bend and there is no doubt in my mind that when you add travel expenses it's going to be well over $10,000," said Common Council President Derek Dieter.

So who are the final three?

First, there is Christopher Elg. He is the current police chief in West Monroe, Louisiana.

Elg has 17 years of experience, a degree in police science and two masters degrees. He's also a special agent for the U.S. Coast Guard.

The only problem is that he is also a finalist for two other police chief positions. One in Bismarck, North Dakota, and the other in Bellingham, Washington.

The second candidate is Robert Teachman. He worked his way up the ranks until becoming the police chief in New Bedford, Massachusetts.

However, there were 55 open internal affair cases when he left the department in 2011.

Teachman has a law degree and two bachelor degrees and currently works as a consultant for a company based in Washington D.C.

Earlier this year, Teachman withdrew his name from another police chief search, saying the timing was not right to leave his current employer.

Then there is Bruce Marquis. Most recently, he retired from his job as police chief in Norfolk, Virgina, amid a controversy.

According to local media reports, he was forced out after public calls for his resignation.

It centered around how he handled the death of a police recruit during a training exercise. At the time, allegations surfaced that he did not read the full report into the recruit's death.

There was also an investigation into allegations that Marquis misused his city credit card. Expense reports showed he used the card to stay at expensive hotels, eat at high-end restaurants and to pay for satellite radio and Onstar services in his police vehicle.

"We are going to do our homework, we are going to request their personnel files and talk to the council members in the cities they once worked. We will also invite the candidates to meet with us," said Dieter.

Davis says he hopes the advisory committee was aware of these candidates' pasts before making a recommendation to the mayor.

All of the council members have one shared concern, that this entire process is taking too long. They believe South Bend needs a chief now and they worry that by choosing three finalists, it will only prolong a final decision.