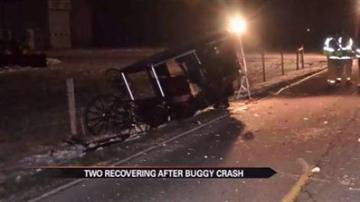 KOSCIUSKO COUNTY, Ind. -- A Milford toddler and father who were airlifted to Memorial Hospital after a car collided with their buggy near Nappanee Friday night are still recovering.

Arlen Lehman,51, is still listed in serious condition while the hospital said his 4-year-old daughter Ranae is in good condition as of Sunday night.

The buggy flipped on its side after it was struck by a Volkswagen.  The driver of the car said she hit the brakes as soon as she saw the buggy but couldn't stop from sliding into it.

Lehman's wife and two other children were inside the buggy at the time but were not injured.