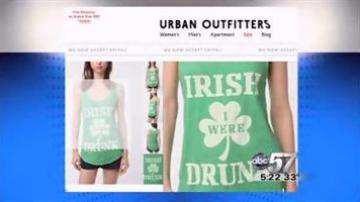 PHILADELPHIA, Penn.-- In two weeks people across Michiana will celebrate St. Patrick's Day, and this year, a popular clothing store is trying to help people party.

The problem is, some people are calling their clothing offensive.

Urban Outfitters rolled out T-shirts and hats for the holiday. One shirt reads "Irish I were drunk," and another says "Kiss me. I'm drunk, or Irish, or whatever."

The store also has a trucker hat that reads "Irish yoga" and displays a picture of a stick figure on their hands and knees vomiting.

A congressman from New York is among several people who are demanding Urban Outfitters stop selling the clothing, saying that it negatively depicts the Irish Community and St. Patrick's Day.

Anji posted, "Hmm. Not offensive. I think they are funny."

Sarah wrote, "I'm mostly offended by how idiotic and un-funny these are."