US airstrike in Somalia kills more than 100 al-Shabaab militants 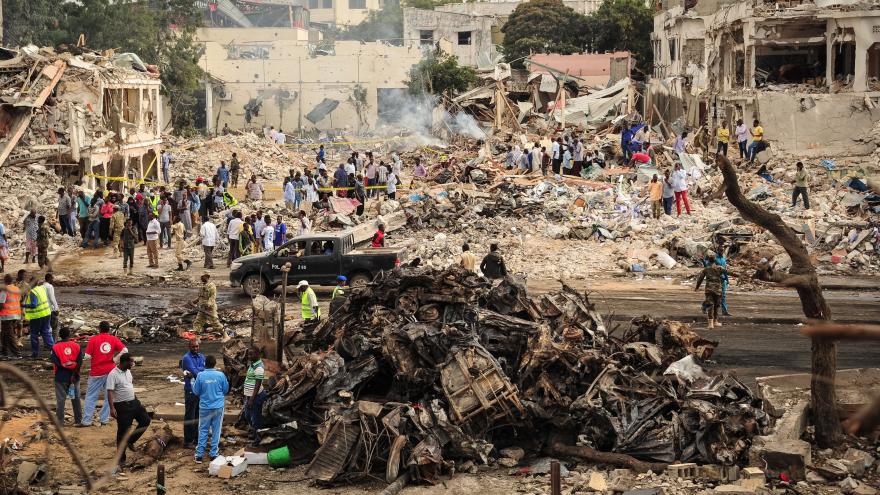 (CNN) -- More than 100 al-Shabaab militants were killed Tuesday in a US airstrike on a camp in Somalia, US Africa Command said in a statement, the latest in a series of strikes against the al-Qaeda-affiliated group and ISIS fighters in the war-torn country.

The strike on an al-Shabaab training camp was carried out by a manned aircraft, according to a US defense official.

Africa Command, which oversees US troops on the continent, said it took place 125 miles northwest of the capital of Mogadishu.

US Defense officials told CNN about the strike earlier on Tuesday.

The Defense Department now has 500 personnel in Somalia including military, civilians and contractors, more than double the 200 personnel that had been reported to be in Somalia in March 2017, according to US Africa Command.

The personnel are part of the effort to support African forces fighting al-Shabaab as well as ISIS forces there. While estimates have fluctuated over time, the US now estimates there are between 3,000 and 6,000 al-Shabaab fighters and less than 250 ISIS operatives in Somalia.

US troops have primarily operated in Somalia to provide training and assistance for local forces. But US special operations forces also continue to rotate in and out of Somalia, conducting counter terrorism operations according to defense officials.

Early November saw a decided uptick in US airstrikes in Somalia. Africa Command and the Pentagon insist the series of airstrikes are simply due to the ability to identify targets and not as a direct result of a number of recent massive deadly suicide attacks in the Somali capital of Mogadishu, including a double truck bomb attack in October that killed hundreds.

"We've always stressed the importance of putting pressure on the network," said Samantha Reho, an Africa Command spokesperson. "The opportunities presented themselves with the right conditions and are purely coincidence."

The increase in strikes in Somalia as well as Libya and Yemen, is driven by the intelligence that is gathered, according to officials: "I think as we constantly assess the battle space, when targets present themselves that are actionable and within the law of armed conflict, we're going to strike those targets," Lt. Gen. Kenneth McKenzie, director of the Joint Staff told reporters.

There have been 29 strikes acknowledged by the Pentagon so far this year. Seven of those strikes took place between November 9 and 14.

November 10 in the Lower Shabelle Region of Somalia, about 20 miles north of Mogadishu, killing several militants.

November 11 near Gaduud, about 250 miles southwest of the capital, Mogadishu. Prior to the strike, US forces observed the al-Shabaab combatant participating in attacks on a U.S. and Somali convoy. US forces subsequently conducted the strike under collective self-defense authorities.

November 12 there were two separate airstrikes against al-Shabaab and ISIS, killing several terrorists. The first was against al Shabaab in the Lower Shabelle region, the second against ISIS in Puntland.

On November 13, there was another airstrike 250 miles southwest of Mogadishu when al Shabaab fighters posed a threat to a Somali led counterterrorism operation.

November 14 strike against al Shabaab about 60 miles northwest of Mogadishu.

The strikes have been made possible by President Donald Trump's decision in April to grant new authorities to the commander of Africa Command.

The new authorities gave the Africa Command commander the ability to carry out "precision airstrikes" in support of African Union and Somali troops fighting terrorists in Somalia. Previously, strikes could only be conducted in self-defense of US forces.

The US military also carried out two drone strikes in Libya on Friday and Sunday, targeting ISIS fighters in near Fuqaha, Libya, multiple US officials told CNN.

This story has been updated to reflect a statement from US Africa Command.