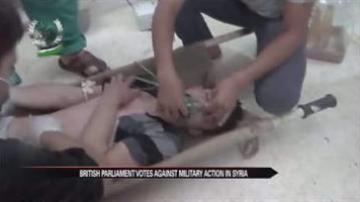 WASHINGTON, D.C. — U.N. inspectors will complete their investigation into whether chemical weapons were used last week in Syria.

And as the Obama administration tries to shore up international support for air strikes in the war torn country, the British Parliament voted against military involvement in Syria.

"It is clear to me that the British Parliament,  reflecting the views of the British people, does not want to see British military action," said Prime Minister David Cameron. "I get that, and the government will act accordingly."

The White House says President Obama has not yet made a decision but is prepared to act alone calling Syrian chemical weapons a threat to U.S. security.