US33 reopens after collision between bus and SUV 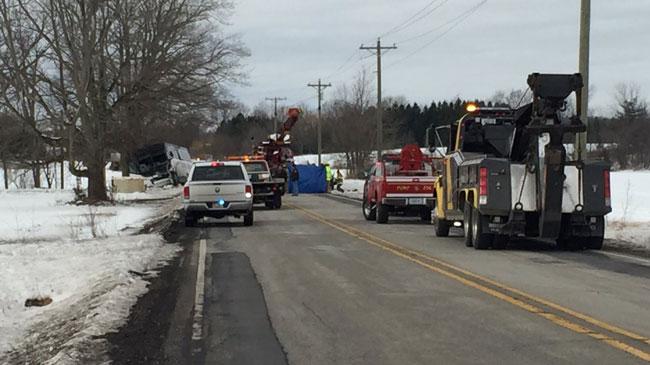 US 33 in Whitley County, north of Churubusco, was shut down in both directions Thursday afternoon because of a head-on crash involving an SUV and a Baron Bus.

The passengers were taken to the Smith Township Fire Department to wait for another bus to pick them up.

Passenger Zachary Harper was heading home for the holidays when the crash happened.

"I was looking at my phone and then I hear the bus driver just slam on the brakes and as soon as I look up I see the car and the bus just hit head on," said Harper.

The collision happened around 11:15 a.m.

"I bumped my chin on the seat in front of me and I fell on the floor. And then as soon as I look around there’s a bunch of people just distraught . Didn’t know what was going on. And then people were jumping out of the windows just because the door was blocked off we fell into the ditch," said Harper.

The driver of the SUV was taken to the hospital with critical injuries.

The driver of the bus was taken to the hospital with serious injuries.

While passengers waited for another bus, the community took care of them.

"Our local McDonalds restaurant provided a bunch of food. Our local school system brought food in for them. One of our local grocery stores brought cases of water. So we were just trying to keep them as comfortable as possible while they wait," said Captain Bruce Shanabarger of the Smith Township Fire Department.

A representative from Baron declined to comment when the new bus arrived around 4 p.m.

The bus was traveling from Gary to Canton, Ohio when the collision occurred.

This story was originally reported by ABC21.