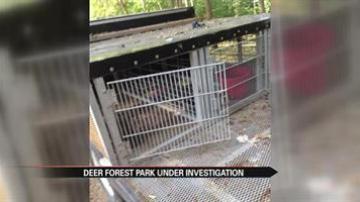 COLOMA, Mich. -- Deer Forest Amusement Park has been serving tourists in Coloma, Michigan for 65 years. The park is under federal investigation by the US Department of Agriculture, but they won't be specific about the reason for the investigation.

Previous USDA inspections show animals at the park have been malnourished in the past. But the most recent inspection, in September 2013, there were no issues found.

According to court documents we obtained, the manager of the park, Jon Stolarz, also known as Jon Gadberry, has a history of animal cruelty.

People who have dealt with Stolarz in the past say they aren't surprised.

Nicole Watson, a mother of three, is a dog lover.

She adopted a German shepherd named Dirk in July of 2009.

By July of 2012, she says she started looking for help to train him.

That's when she found Jon Stolarz, who she says agreed to train Dirk.

Two months and $800 later-Watson says she got a phone call telling her Stolarz was leaving the state and that Dirk was left in a two by three foot kennel with nearly life-threatening injuries.

"It's hard to tell your then 9-year-old that your dog that you loved and was there by your side 100 percent, slept with you, went everywhere with you had to be put to sleep because some man abused him," said Watson.

Amanda Prosek's daughter Sadie has a severe form of epilepsy. After finding Stolarz's dog breeding business online, she purchased a Labrador retriever for $1,000.

Her hope was a service dog and companion for Sadie.

Instead she inherited a malnourished puppy and vet bills because he was so ill.

As little as half a cup of food shocked Zeus' system causing him to vomit and have severe diarrhea.

"They thought he had Parvo, but he was just reacting to the amount of food in his stomach," said Prosek.

Kelly Radtke has a similar story.

She too purchased a yellow lab puppy from Stolarz for $1,000. She says she had to return the dog to stolarz because it was too sick to care for and too aggressive around her children.

She claims she never saw a dime from Stolarz-even after taking him to small claims court in Illinois and winning the suit for $5,000 in restitution.

We called Stolarz but the only response we got was Deer Forest Park's voicemail.

For the women who claim Stolarz conned them, they say they will continue to seek justice and encourage others to hear their stories.

"I'm not going to stop. He doesn't deserve to be around any animal," said Watson.

We tried multiple times to contact Stolarz but have not heard back yet. We will continue to work to get his side of the story for you as well as follow up with the USDA's investigation into Deer Forest Amusement Park.