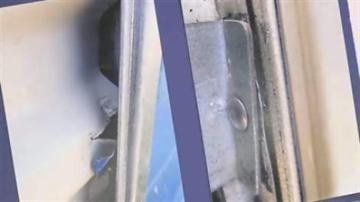 MISHAWAKA, Ind.---Vandalism is plaguing one local little league field. Parents and kids are speaking out against the rash of vandalism the park's been seeing since the fall.

We caught up with players and their parents at a baseball clinic at Mishawaka High School.

Chris Romeo's been playing baseball almost half his young life. After the recent rash of crime, he says he's sick of his home field being vandalized.

"Our park is messed up enough and that's kind of a waste of money," said Romeo, baseball player, Mishawaka Little League.

All throughout the season, vandals cost the league a lot of money and frustration, ruining doors, cleaning out the concession stand, breaking lights and kicking in doors.

"And the home team dug-out on the minor field that's terrible they had all these--they sprayed cuss words all over them and wrote nasty things," said Romeo.

When volunteers made repairs and reinforced the doors, the acts got more violent-acts including arson.

"When I saw it the next morning after Saturday morning then I saw this huge hole and that was terrible. Awful," said Romeo.

The league is a non-profit and struggling to make money. Now it relies heavily on donations and sponsors.

"It's the volunteering that we need, the parents to help us cover up the grafitti," said Bridegroom. "Emotionally it's hard, it's frustrating, it's exhausting."

But ten-year-old Chris thought up a solution.

"Maybe have cameras like over the concession stand, over the shed and like all the buildings and stuff and that would be good," said Romeo.

The non-for-profit is celebrating it's 50th year. It also hopes to purchase a commerical mower after it gets the funds for a security system.