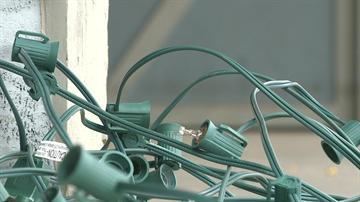 BUCHANAN, Mich. – Vandals put a damper on holiday celebrations in Buchanan sometime over the weekend.  On Monday morning city workers found eight strings of lights torn down from pillars on the city’s common stage downtown.  The vandals also broke the individual bulbs on the strands, leaving shattered glass strewn across the stage.

“These are purchased with donated funds, the city doesn’t use tax money to purchase these items to display,” explained Chief of Police and Buchanan City Manager Bill Marx.  “Six or eight strangs of lights are fairly expensive when you have a pretty limited donated budget.”

In all, Marx estimates up to $150 in damage to the city’s decorations.  The strands had already been torn down once days before but they hadn’t been destroyed.  Having someone so focused on removing the city’s holiday lights is a frustration for the workers responsible for putting them up.

“We had to go out and get some more lights, come back out here and re-hang all the lights back on the poles,” described Craig Miller of the Department of Public Works.  “To them it’s probably a game but to the city it’s a lot of time and money.”

Miller said he and his fellow workers were disappointed to see someone damage the display, the workers put pride into making the holiday lights bigger and better every year.

“It’s holding us back redoing all the stuff we already did,” Miller explained.  “It’s the season, it’s supposed to be a fun time and everyone should be having fun not tearing things apart and vandalizing stuff.”

The city has offered a $200 reward for any information leading to the vandals.  Chief Marx explained that, to him, what’s more hurtful than the damage is the thoughtlessness behind the crime.  But, with nearby residents on alert, increased attention from police and security cameras being put in place he’s hopeful the vandalism will stop.

“Santa Clause will be monitoring along with the police department,” Marx joked.  “We hope to locate the individuals and have a few words for them that’s for sure.”

Craig Miller and other workers replaced all the lights on Monday afternoon.  He said they’re on track to have the entire display ready for Buchanan’s lighting ceremony which is scheduled to take place at 6:00 p.m. on Friday December 1st.