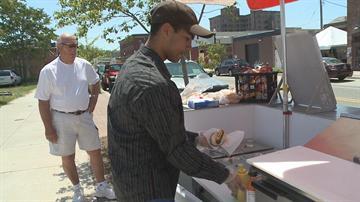 Parker is one of several vendors selling food near the Arts District on Territorial Drive in Benton Harbor.

Parker is born and raised in Benton Harbor. “Class of 1978,” he said. The view from his food stand is something he has never seen before. “I get lost driving around.”

He moved to Grand Rapids after graduating from college but Parker is back in Benton Harbor to make a few bucks with his southern-style cooking.

“The golf course is only about 300 yards from right where we’re at,” said Jake Gowens, another vendor on 5th street.

Gowens is selling hotdogs and chicken wings to take advantage of the new foot traffic in Benton Harbor. He has seen vendors before. “Not this many vendors,” he said.

“It’s back and it’s back to stay,” said Parker of the changes downtown.

Sure the money is good this week but it’s also nice to see so many people involved in a place he remembered so differently. “(The people aren’t) so much interested in golf, they just want to support what’s going on down here,” said Parker.

Entertainment and bands are scheduled downtown throughout the PGA week.