Veterans remember POW and the MIA, local government turn out is limited 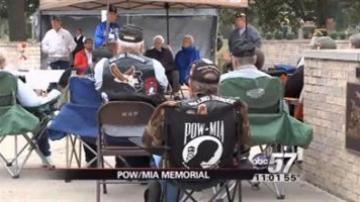 SOUTH BEND, Ind. – Dozens of veterans gathered Sunday, to show their support and remember POW and MIA troops that still have not returned home, for an annual memorial service at Military Honor Park.

The service marked the first time the Vietnam Veterans group has joined with the VFW and American Legion in recognizing the missing.

Several POW/MIA themed displays were erected including an Empty Chair memorial; a candlelight vigil; a field cross; and a bamboo cage.

Honor Guards from the American Legion and Junior ROTC were on hand, and Taps was played after a 21-gun salute at the end of the program.

The service brought somber faces and stoic contemplation, in addition to a few tears.

The keynote speaker James Ball, a former Korean War POW, spoke of his time in Korea both before and after his capture.

He also spoke of his discontent with the cavalier attitude he feels some have toward the freedom they enjoy today. “I think we take it for granted. You know, we live carelessly,” said Ball.

Other veterans like Dale Hurt expressed unhappiness with the federal government for being unable to locate and bring home the thousands of troops still missing in action today. “Korea has something like 6,000 men that never been accounted for,” said Hurt.

While Hurt was fuming about the federal government, there was a noticeable lack of representation by local governments as well. Only Congressman Joe Donnelly’s office sent a representative to address the crowd.

When it comes to special days for veterans, fallen and deceased troops are specifically honored on Memorial Day; Veterans Day is dedicated to honoring those still with us today and; POW and troops MIA are honored on the third Friday in September every year.

But without wide local support for commemorating this day of remembrance, local veterans groups are often on their own to organize to their own small ceremonies.

Organizers of Sunday’s memorial service tell ABC 57, the ceremony at Military Honor Park has been an annual event for about 15 years and; the number of veterans groups participating grows each year.