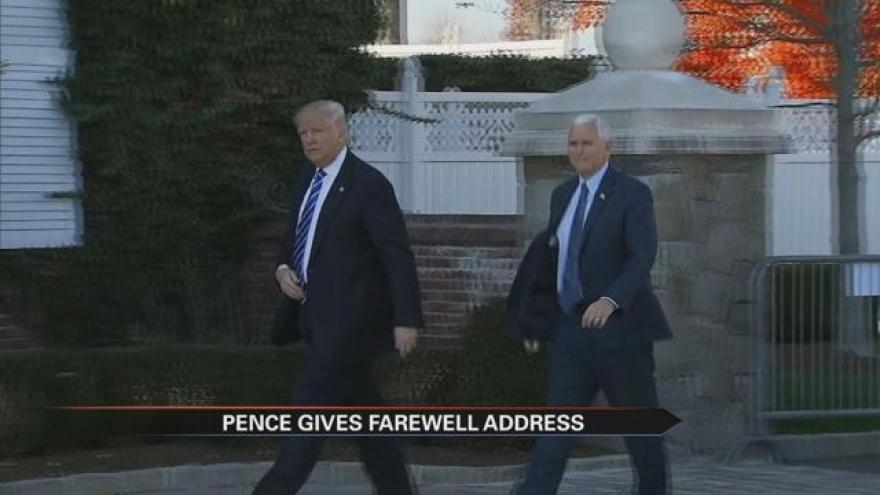 Governor Pence delivers a farewell message to Hoosiers about his term in office. In a YouTube video, Pence shares his thoughts on the last four years and what has been accomplished.

Mike Pence is saying Hoosiers are known around America for being good, kindheated people. He says they’re always willing to help each other out in times of need, but perhaps most importantly, he’s saying Indiana has succeeded in fiscal responsibility, innovation and a growing economy.

Pence continues by saying the state has lived up to their reputation and worked hard to create a place that attracts jobs and investments.

Today, there are more Hoosiers working than ever before. That’s because Indiana’s economy added more than 165,000 new private sector jobs.

According to Pence, unemployment has been cut in half during his last four years. There was more than $2.5 billion in new funding for roads and bridges, without raising taxes.

Moving on to health care, Pence says Healthy Indiana Plan, “…is a national model of how to provide affordable health care coverage.”

When talking about education, Pence says the state has set aside millions of dollars to increase pay for good teachers.

Indiana is the first state in America to make career and vocational education a priority again in every high school.

According to CNN Politics, Pence said Wednesday, it’s part of keeping promises republicans have made. Pence said they’re going to keep their promise by repealing Obamacare and replacing it with solutions that lower the cost of health insurance without growing the size of government.

When it came down to voting, Pence’s argument was that they were only trying to clean up democrats’ mess.

Pence says he remembers being present when Obamacare was signed into law and says, “I remember all those promises, we were told. That if you like your doctor you can keep it, not true.”

No specifics yet on what that lower cost plan is going to entail, but according to Pence they don’t plan on disrupting coverage for the 20 million Americans insured through the Affordable Care Act.

Pence’s role in Washington is wearing a couple hats. He will already have an office, as president of the Senate and will also have a House office something that CNN reports as close ties to House republican leaders.

Inauguration Day is January 20 at 9 a.m.