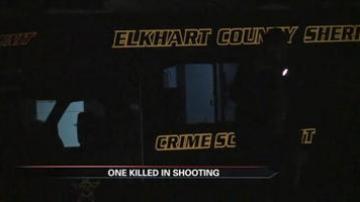 ELKHART, Ind. -- One person was killed in a shooting at an apartment complex just outside the Elkhart city limits. It happened at 10:46 p.m. Sunday at Deer Creeke Apartments in the 2800 block of Toledo Road.

Officers say they found the victim inside one of the apartments. They said the victim had been shot.

The victim was identified as 26-year-old Anthony Perez.

"It's a serious incident, we're going to take this a step at a time," said Captain Jim Bradberry of the Elkhart County Sheriff's Department. "We have our crime scene unit on the scene with detectives that are trained in processing these scenes so it takes time. We're going to do our best to put the pieces together."

Perez's death has been ruled a homicide.