VIDEO: Driver fleeing police crashes on US30 and Oak Road

VIDEO: Driver fleeing police crashes on US30 and Oak Road

KOSCIUSKO COUNTY, Ind. -- A viewer captured video of the moment a vehicle running from police crashed and overturned on US 30 just before noon on Thursday.

An Indiana State Police trooper was conducting a traffic stop on the side of US30 just west of CR 500 West, when the Chrysler failed to move over or slow down as required by law, reports said.

When the trooper caught up with the Chrysler, he determined the license plate did not match the vehicle. When he turned on his red and blue emergency lights on his unmarked Dodge Charger, the driver failed to pull over and drove speeds up to 100 miles per hour as it drove westbound on US 30.

The pursuit continued into Marshall County.

A trooper deployed stop sticks near Iris Road, which flattened both driver’s side tires of the Chrysler.

The driver did not pull over the vehicle and instead continued to flee westbound, police said.

The Chrysler continued westbound while driving on three rims.

The Chrysler hit another set of stop sticks near the overpass for SR-17 but continued westbound.

Near Oak Road, the Chrysler tried to pass a semi on the right side and lost control.

The Chrysler went off the side of the road, struck two signs and overturned in the ditch.

The driver, 28-year-old Merieal Tolbert of Chicago, was taken into custody, then transported to the hospital to be checked out.

The Chrysler had been reported stolen out of Fort Wayne on Thursday.

A viewer, Skylar Russo, submitted a video that showed the end of the pursuit at US 30 near Oak Road. 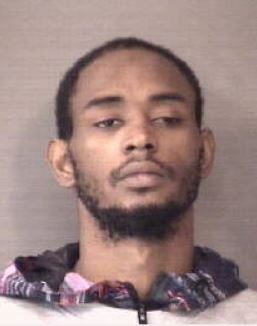