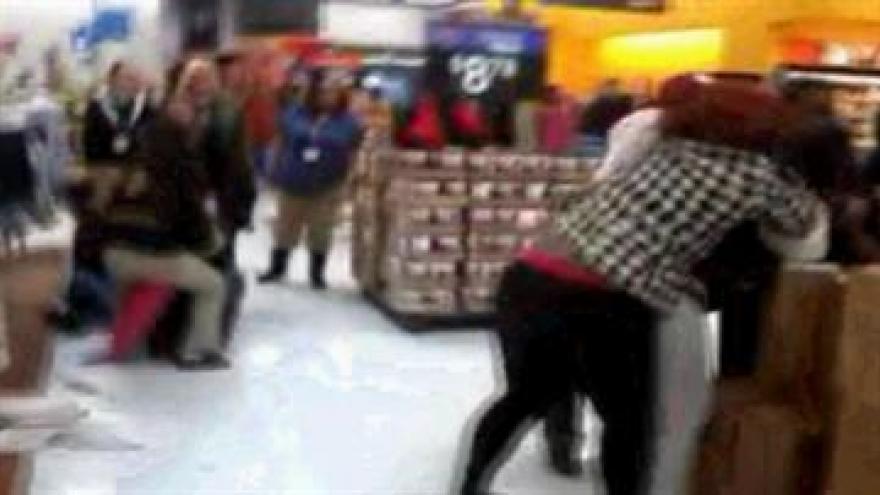 BENTON TOWNSHIP, Mich. - Friday afternoon just before 3 p.m. a wild fight broke out at the Wal-Mart on Mall Drive in Benton Charter Township.

According to the Benton Township Police Department, two groups of women with a long-standing dispute used the store’s isles to fight.

Cell phone video that circulated in Facebook over the weekend shows five women brawling. Some rolling on the floor and other can be seen pulling out each other’s hair. It all happened while customers and employees watched.

“I think people should find a better way to solve their problems,” said Tori Seuell a Wal-Mart shopper watching the video for the first time. “That’s unbelievable,” said another shopper, Judy Godush.

The cell phone clip is about two minutes long and no security guards can be seen in the video. Godush said she can’t help but think maybe a few more security guards inside wouldn’t hurt. “It’s going to have to be called for if that kind of thing is happening in there,” she said. “I’ve never seen anything like it before.”

Chief Vincent Fetke with Benton Charter Township PD said Wal-Mart’s Loss Prevention Team eventually broke up the fight. Four adult women and a teenager were cited with ‘Disturbing the Peace’. Paperwork has been sent to the Prosecutor’s Office and further charges are possible.

A Wal-Mart corporate spokesperson said the behavior is not tolerated and the store will be working with police to reevaluate the security situation at the location.

None of the women or bystanders was hurt in the fight.