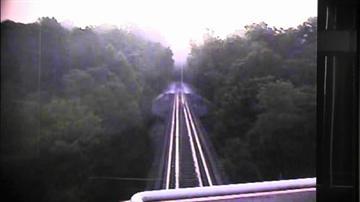 INDIANAPOLIS -- The Indiana Rail Road released video of two people running from an approaching train while on a railroad trestle over Lake Lemon near Bloomington. They released the video of the two women to remind people how dangerous it is to trespass on railroad tracks.

The engineer spotted two women on the tracks in the middle of the bridge. He immediately applied the emergency brake and the horn.

As the women ran from the train, one fell, got up and kept running. She then laid down between the rails and her companion did the same.

When the train finally stopped, the train was off the bridge and the engineer thought he had killed two people.

The two women survived and fled the scene. They have since been located and it is now a criminal matter.

The train derailed because the emergency brake was applied.

“In this case, not only did two trespassers narrowly escape a horrible death, but had the heavy train derailed due to the emergency brake application – which isn’t uncommon – it could have taken down the bridge, possibly killing the engineer as well. The human, environmental and financial toll would have been enormous," said Tom Hoback, CEO of the Indiana Rail Road Company.

According to the company, 908 people were killed while trespassing on railroads in 2013 and 38 of those were in Indiana.