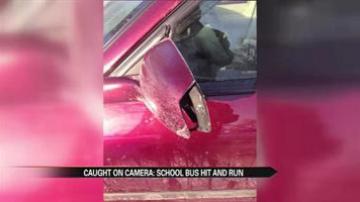 SOUTH BEND, Ind. -- Have you ever walked out to your car to find it's been hit or side swiped? That's exactly what happened to one of our ABC 57 employees. What might surprise you is the vehicle involved in the hit and run was a South Bend school bus - and it was all caught on video.

The video shows a South Bend school bus struggling to make it up South 36th Street which was narrowed by piles of plowed snow.

The owner of the maroon Impala is an ABC57 employee. He caught the whole incident on his cell phone.

When he went outside to check out his car, he says he found his driver's side mirror had been struck and damaged.

"Normally what happens is someone phones us and gives us a report that they got damage to their car whether it be a mirror, or body damage or whatever," said Mike Nolan, Director of the Department of Transportation for the South Bend School Corporation.

We spoke with the safety supervisor who took our employee's name and information and filed a report.

"If they're not aware of it, obviously they don't stop. If you've ever been on a school bus obviously you know how noisy they are and students and the engine and all that's going on," said Nolan.

Nolan says he has to keep track of hundreds of school buses running through these neighborhoods every day.

Which means there are many opportunities for these kinds of accidents to happen.

"We're covering a large area here so there's a lot of exposure out there with the number of buses and in some neighborhoods there will be three of four buses going through the same neighborhood," said Nolan.

Nolan says the weather this winter has been a nightmare for bus drivers.

"In this weather, with the cars parked like they are and the streets as narrow as they are due to snow conditions we're making a lot of detours and so drivers are having to go out and actually change their routes on the spot to get close to bus stops to pick up children," said Nolan.