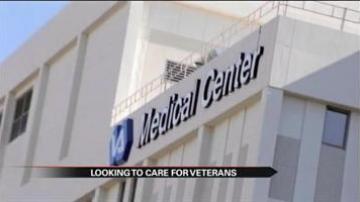 DOWAGIAC, Mich.  -- Veteran Affairs hospitals are at he center of a national controversy.  ABC 57 localized the issue by talking with Jody Lansberry, Vietnam veteran, who says he might not be alive if it had not been for the VA hospital.

"I tell you, American people, sometimes forget what freedom costs," explains Lansberry. The veteran comes from a long line for military men who put their lives on the line for freedom. "My brother, my father, they have made actual eye contact with the enemy. I'm lucky, that all my family made it through the war."

When it comes to the national controversy surrounding VA hospitals, Lansberry has one thing to say,  "I love the VA.  Those people are overworked but they treat me like gold." Lansberry says he has never been on an unreasonable wait list.

Four years ago, Lansberry had a health scare, he says the VA hospital is the one of the only reasons he is still alive. "I think I will be around for a couple years, I hope." expressed Lansberry.

The vet says there is no denying; the VA needs more funding, and more staff. "If you would visit a VA hospital you would see the extent of business they do. Its just crowded, its just so crowded." But Lansberry says, unlike what he hears in the news and on Capitol Hill, he believes the VA is doing the best it can in most places. "I mean, maybe we live in just an outstanding area where people care about their veterans."