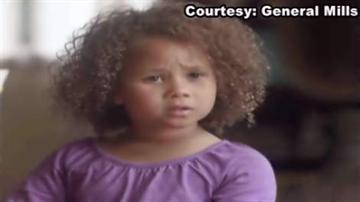 SOUTH BEND, Ind-- Some are calling the depiction of the American family eating one of American's favorite cereals-- controversial. One of our own viewers even went as far as keeping track of how often the commercial airs between our broadcasts.

A pretty girl with cute curls is causing some controversy.

"I found that one commercial offensive to my taste, to my generation, of the biracial couple," said  Marilyn Carter.

Carter says she's tired of seeing this commercial on ABC57, so she emailed the station saying "it is plain to see that this half-breed child is being exploited and that is wrong."

"I call them half-breeds and I'm sorry but that's the way I was raised," said Carter. "This poor child is going to have hard knocks now the rest of her life growing up just because of the way our culture is."

We asked if she'd call herself a racist.

"No, no opinonated yes, racist no"

ABC57 wanted to get some historical perspective on this issue, so we reached out to a professor of intercultural studies at St. Marys. Mana Derakhsani says the commercial's backlash is proof that a racial divide still exists, but says it's our children that will cure racism.

"Some of these children, the only president they'll have known is African American," said Derakhshani.

That's why when most children watch the Cheerios commercial, the reaction is different.

"The children in that YouTube video didn't even notice that the couple in the commercial was interracial," said Derakhshani.

Carter did notice, and says it's all the talk at the Buchanan Senior Center.

"I can see 500 years down the road and everyone will be a light brown with brown eyes. There won't be any blue eyed, blonde people. I mean this is my opinion," said Carter.