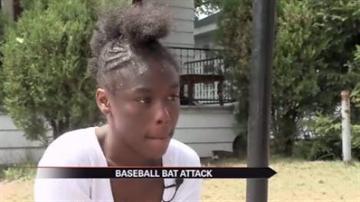 SOUTH BEND, Ind. -- Two mothers in South Bend's west side held a neighborhood party to celebrate their attempts to clean up the neighborhood and keep violence out. But violence broke out at that party and a 16-year-old girl is accused of beating a 13-year-old girl with a baseball bat.

"The girl ran in the house and started hitting her real bad," said Compton.

It's a kind of violence he sees far too often on the west side. He says he sees violence eight to ten times a week.

The fight happened at a party that was supposed to bring residents together to stop violence in the neighborhood.

"I was very upset. I was very disappointed, because I'm not that type of person; I like for kids to get along; play right as well; I don't like no fighting," said Doris.

"She trying to stop the violence and help us clean up the community," said Katherine Stidhul.

Katherine is accused of hitting another girl with a bat during the event.

"All my life I've been bullied and it's sad for what I did to that girl," said Katherine.

We asked what she would say if the girl was there today.

"I'm sorry I hit you with a bat," Katherine said.

"My daughter's hand's totally messed up; and if my daughter wouldn't have been grabbing that baseball bat she could have hit her in the head and would have been dead. So there's no saying, 'Sorry for doing that, oh I made a mistake,' No," said Barbara Bango.

Doris said she signed her daughter up to see a doctor about her anger management.