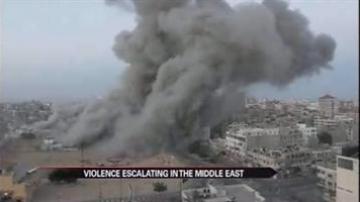 Sunday violence is escalating in the Middle East even as talks have begun of a possible ceasefire.

Israel expanded its air assault on Gaza as its defense system protected its most populous city from a Hamas rocket attack.

For days, tanks and troops have been building up along the border ahead of a possible invasion.

There have been talks of a cease-fire but Israeli officials are staying tight-lipped.

"For the time being rockets are still be fired onto Israel, we will go on with military operations, we will not exclude any option, including the diplomatic option," said Yigal Palmor, Foreign Ministry Spokesman.

Three Israelis have been killed, around 50 wounded.