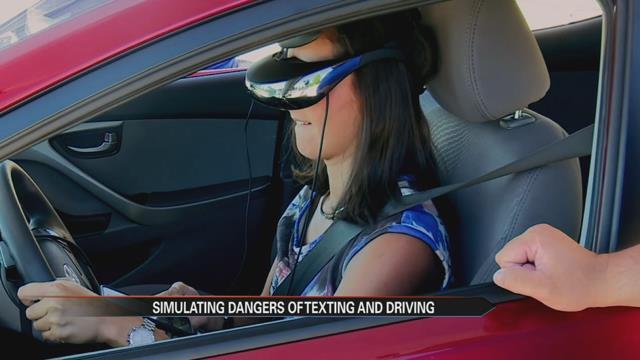 A virtual reality simulation program is being used to help teens learn the dangers and risks associated with texting and driving.

The program is heading to four other schools across the state this week, to share the information.

Indiana needed the help.  In 2014, it was ranked 50 out of 50 states in teen driver fatalities - making it one of the worst states in the country for teen drivings.

Preston Koenig is a PEERS ambassador who led the simulation on the Adams campus.  He believes that this program is one factor that improved Indiana's rankings.

"I think it's pretty effective," he says. "They're shocked how hard it is for them to drive when they're texting and messing around on their phones."

Zoie Ziolkowski is a senior at Adams.  She admits she regularly texts and drives, and was hesitant to take part in the demonstration.

"I'm kinda nervous to try it and see the results," she says.

Like many other students, Ziolkowski crashed the car several times, while attempting to send several texts during the virtual reality driving course.

It scared her. "It was so real, and I did not pay any attention.  I was trying to focus on the text. It was - it was pretty bad," says Ziolkowski.

She swears it made her re-think her driving habits and says "Scary experiences do cause you to not text and drive anymore."

Koenig says that's the point of the program,and he hopes bring the program to more schools and campuses to save more lives.