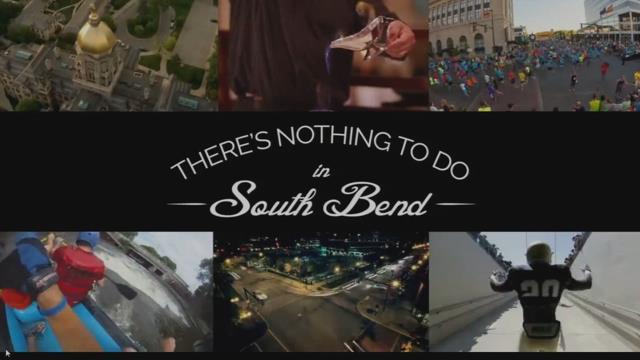 There’s a thin line between inspiration and imitation.

Visit South Bend, the St. Joseph County marketing organization, pulled a digital advertisement after they were called out for their video, “There’s nothing to do in South Bend.”

It’s a cheeky way to address misconceptions about the culture of this vibrant city.

“It’s a great concept so I immediately emailed some staff and some colleagues and said we should try to do something like this here because it’s just brilliant,” said Rob DeCleene, Executive Director for Visit South Bend.

It’s a fun video and a great concept, but the problem is Visit South Bend wasn’t the first.

“There’s nothing to do in Salt Lake” was the original video.

“From day one, Visit Salt Lake was the inspiration,” said DeCleene.

Visit South Bend’s office saw it as inspiration, but the original’s creators saw it as imitation.

“Everybody’s had somebody borrow an idea from them at some point so this was just really heavily borrowed from,” said Chip Haskell, Creative Director for Love Communications.

Haskell sent a letter to Visit South Bend after coming across the video.

Much like the tone of the original, he used a little humor to get his point across.

“We thought about tactics to take and we thought maybe just writing a light-hearted sarcastic letter was better than doing something more heavy handed,” said Haskell.

After talking it over, Visit South Bend took it down.

“Because it was perceived as a carbon copy, we were more than happy to take it down,” said DeCleene.

Now, the city hopes this mishap won’t take away the focus of its message.

“I was really upset when I saw that mostly because South Bend has so much to offer and I don’t want anything to distract from the fact that we’re a unique community with all these amazing resources,” said South Bend Mayor Pete Buttigieg.

DeCleene says that video was never meant to be a campaign, it was just a project they had put on Facebook.

Their current campaign for the city is titled “Get Out and Get Active, South Bend.”