Voters hope for a clean slate in the primary 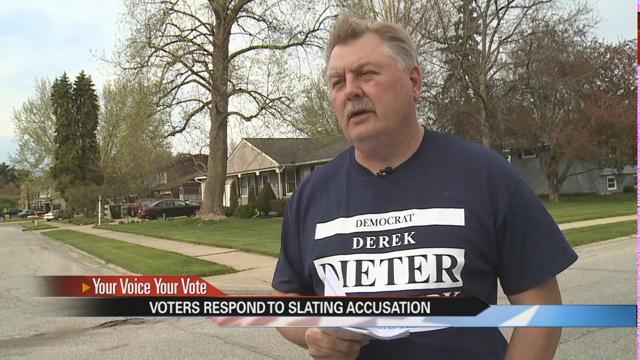 Emotions are high in the race for South Bend City Clerk. On Wednesday evening, candidate Derek Dieter filed a complaint against Mayor Pete Buttigieg and his opponent Kareemah Fowler for breaking election rules.

Buttigieg's campaign fired back saying they didn't do anything wrong and called this a “last-ditch maneuver” by Dieter.

Voters out in downtown South Bend on Wednesday said they believe this issue between Dieter and Fowler is just another political tactic.

“It seems to me there could be a violation,” says Common Council Vice President, Derek Dieter.

“You have to notify the election board five days previously to sending all that out,” says Dieter.

Dieter says the election board never got that notification from Mayor Pete and he thinks that's unfair.

“I'm not frustrated. I think there's integrity of election that's at stake and I think if something is wrong it needs to be brought to the forefront,” says Dieter.

Buttigieg's camp says Dieter has it all wrong.

"Derek Dieter is simply mistaken. As has been widely reported, that law was struck down by a federal court last year. Even if the law still stood, it would not have applied in this case because our support for Kareemah's campaign did not constitute slating. It's unfortunate that Derek went public in this last-ditch maneuver without taking time to understand the facts. Meanwhile, our campaign will continue to focus on our positive message of moving South Bend forward, and we will spend the next six days talking with voters about the issues that matter to them."

The bigger question for voters on Wednesday: do they even care?

Other voters say they're sick of never hearing conversations that need to be had.

“I feel like most of politics these days is just let's not actually ever talk about the real issues,” says Adam MacMillan, a South Bend voter.

Dieter says his complaint will be reviewed by the election board in the next few weeks.