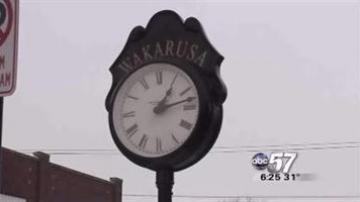 WAKARUSA, Ind.--- A major Michiana company is packing up their bags and moving away.

Utilimaster is currently located along State Road 19 in Wakarusa, but announced on Tuesday that it would be moving 20 miles east to Bristol, Ind.

The news came as a shock to employees and locals, alike. But, local business owners are feeling the brunt of the economic hit.

After 40 years, Cook's pizza is a Wakarusa landmark.

"We opened up right out of high school, my brother and I," said Stanley Cook, owner of Cook's.

In that time, Cook has seen his fair share of the economic roller coaster.

"Economically, it's been up and down like a YO-YO."

But, thanks to the Utilimaster offices just down the street, Cook's has maintained a steady rush.

"Utilimaster is one of our biggest accounts directly and indirectly because of the people that live here and work here."

But Utilimaster's relocation announcement on Tuesday is taking vital customers with it.

And Cook isn't the only one who recognizes the consequences of Utilimaster's move.

"people who live here aren't going to see the support that they used to," said Blake Deriot, the Elkhart County Surveyor. "From people stopping in after work to buying things."

Despite the impending consequences of Utilimaster's decision, the community is staying positive.

"The people in Wakarusa are pretty resilient and they'll come back," said Deriot.

"it's a psychological shock to the community and I don't think we'll know the full effects until down the road. But, you know, we'll survive. We're survivors here and everything will be fine. it's just you want to be a part of the recovery, not a part of the opposite," said Cook.