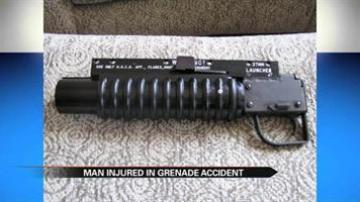 WALKERTON, Ind. -- A Walkerton man is being treated at Methodist Hospital in Indianapolis after a starburst grenade detonated and severely injured his hand.

41 year old Kevin Patterson was airlifted from Plymouth Airport to Methodist Hospital in Indianapolis for injuries he sustained firing a starburst grenade round from an AR-15 platform rifle.

"The 37 millimeter starburst grenade is an aerial illumination round similar to an aerial firework," said Conservation officer Ashlee Jackson.

Ken Dowdle said, “It’s not an explosive device that people use to damage things, it would be no different than people shooting off fireworks. Basically it’s an aerial illumination grenade very similar to a firework and when he detonated the starburst grenade it actually blew up in the tube.”

Patterson's friend who didn't want to be identified, said they hope the doctors can save his hand.

Dowdle said, “We do know it detonated inside of the tube which sits underneath the barrel of the rifle. It’s an attachment and shoots very similar to the rifle itself.”

Dowdle also said it's perfectly legal to have a private shooting range on your property in Marshall County.

Dowdle said, “Here in Marshall County you can have your own personal private shooting range, but you are required to have an adequate backstop, which this shooting range had. They were okay to be doing what they were doing on the property.”

No one was arrested at the scene however the investigation will be forwarded to the Bureau of Alcohol, Tobacco, Firearms and Explosives for review.