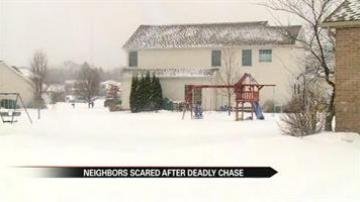 ST. JOSEPH COUNTY, Ind. -- The manhunt for a Granger man came to an abrupt and tragic end Tuesday night when the suspect took his own life. James Erik Turns was a suspect in the arson and theft from the Niles Walmart Sunday night.

Monday, the Berrien County Sheriff's Department released surveillance photos and video from the Niles Walmart of a man they say set clothing on fire, then went to the electronics department and stole several iPads.

After those images ran on the news, Berrien County deputies say they received several tips - all about the same person.

Investigators went to Turns' father's home on Sharpstone Court in the Saddlebrook subdivision in Granger.

From there, Turns fled and led police on a chase to the Bridlewood subdivision.

There, police said Turns started banging on the back door of a home on New Colony Drive.

They didn't open the door - and Turns then shot himself. An autopsy determined Turns died of a single gunshot wound to the head.

Click here for a map of the area where this happened

On Wednesday, we went back the Bridlewood subdivision to talk to the residents.

At the home where the manhut ended, the homeowner posted a note on the front door-reading in part "My family and I have no information to share with the media. Please do not attempt to contact my wife or any of my children."

Nearby residents say they don't blame them.

"It was definitely very traumatic. They're probably just a little in shock right now and don't know what to think," said resident Kathryn Doran.

"It's pretty shocking. I was just talking to my brother yesterday and they have that slider door open cause they have cats and I said 'You need to lock the doors.' and my brother said 'Oh this is Granger, nothing happens here,'" said resident David Doran.

We tried to speak to Turns' father.

We were asked to leave his property and told no comment.

Police believe Turns is the man in the Walmart surveillance images, but the investigation is still ongoing.