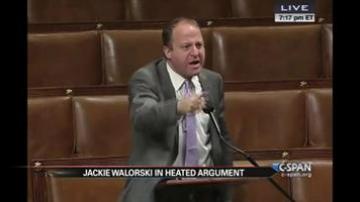 A Colorado representative lashed out at Indiana Congresswoman Jackie Walorski in the House Chambers.

It started when Democratic Representative Joe Garcia from Florida pushed for the immigration bill then acknowledged some people in the gallery for their work on immigration reform. Then Walorski, the Speaker Pro-tem, told him that mentioning anyone in the gallery is not acceptable.

That's when Democrat Jared Polis from Colorado said, "I want you madam speaker to address the reason why they are here. They are here because our government is tearing apart their government Madam Speaker. What you need to understand is the speaker is obstructing HR 14 from ever getting to the floor. Will the speaker understand that?"

Jackie Walorski's office contacted us to clarify what happened. Her office issued this statement.

"Congressman Polis’ outburst on the House floor was in response to his frustration with a House procedural rule.  It was a coincidence that Congresswoman Walorski was acting as Speaker Pro Tempore, and his remarks would have been directed at any Member holding the gavel that evening.  After his episode, Congressman Polis approached Congresswoman Walorski to shake her hand, signaling no hard feelings between the two," said Elizabeth Guyton, Communications Director via email.