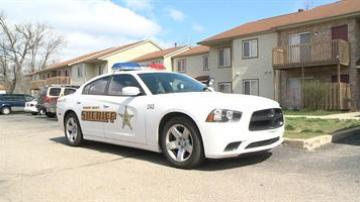 ELKHART, Ind. -- An Elkhart man is behind bars after police say he killed another man. Police arrested 26-year-old Terry Sheets Jr. for the murder of Matthew Bark. The shooting happened just before 1:30 a.m. Saturday at Deer Creek Apartments on Elkhart's east side.

Shaken up, and a little on edge, Maria Mendoza is just thankful her sister Brianna is still alive.

She was fast asleep Saturday morning, when she woke up to the sound of four gunshots, one of them, passed right through her sister's bed.

"I want to move out. I want to go back to my old house, because over there, there were no problems," Mendoza said.

Bark was taken to Memorial Hospital in South Bend, but died at the hospital.

"It's just bad when it has to come ot that, because life is precious," Blake Robertson, a neighbor, said.

He heard the gunshots Saturday morning, but didn't think much of it until he saw police cars in the morning. It's a shame, he said, because now, two families have lost a loved one over something so senseless.

"People just gotta be more conscious of what they do," Robertson said.

That's a feeling shared by neighbors like Jeffrey Foreman as well.

He lives a few doors down, and said in time, the shock will go away, but for now, it's very upsetting.

"It'll be here for awhile. Everybody will be thinking about it now when they see Deer Creeke (Apartments), whether to move there now," Foreman said.