Winters in Michiana are shrinking. That may seem hard to grasp given the now 80 inches of snow we’ve seen this season. However, almost every metric shows our winters are trending milder and less snowy.

Many may cheer at the news there will be less snow to shovel and fewer cold nights. There could even be some benefits: no icy roads, lower heating bills and a longer growing season. However, all those apparent positives may not even out with the negatives. There is a real cost to climate change when it comes to literal dollars and cents and quality of life.

Skiers, snowmobilers and ice fisherman are seeing their seasons shrink. Winter recreation isn’t just fun.  It brings jobs in to many seasonal workers and businesses.

The average length of the snow season in South Bend has dropped from an average of over 150 days in 1950 to less than 140 days in this decade.

Plowing snow in South Bend is usually a pretty reliable bet, especially for those that work in the construction or landscaping industry.

“In a whole, that past two years it's been kinda bad, the past couple winter have been really short,  there hasn't been a lot of snow, I think the past couple years there were only 10 snow days in all,” says Chris Coder, a private plow driver in Michiana.

South Bend’s average snowfall has dropped more than a foot when compared to 30 to 40 years ago. 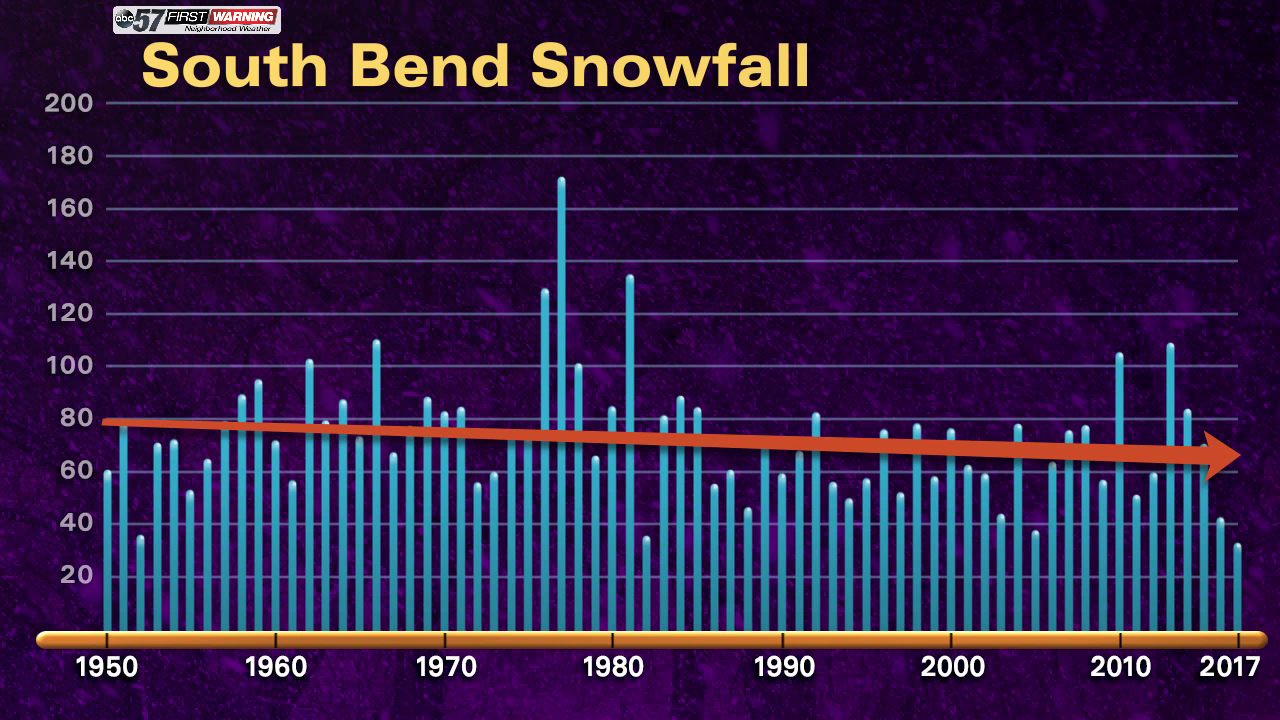 Warmer winters aren’t just bad for plow driver or winter sport enthusiasts. They can impact have a year-round impact with agriculture. That can strike a blow to our local economy and your next trip to the grocery store or farmers’ market.

“Everybody is going to go back to the local businesses—fresher fruits and vegerables.”

Homegrown apples are just one crop that needs a good winter. Our northern variety of apples actually need a certain number of cooling days, usually around 120 to produce a healthy crop year to year.

The average number of days below freezing in South Bend has dropped from 140 days to just over 114 days since the 1950s.

“I think the apples could still grow; you just aren't going to have the good production. They may have to design some bigger or better trees that are going to handle that,” Ditmar says.

Scarcity and designing new custom crops add to costs that will be passed along to you at the register. Purdue University just sold the rights to a variety of apple they developed.

Michiana is great for farming because of its good soil and great climate. But that’s changing.

“We are really good at growing corn and beans,” says Hans Schmitz, an agricultural meteorologist and Purdue extension educator in Posey County, Indiana.

Regular precipitation and cold weather keep bugs and disease at bay. That makes the Midwest great at keeping down the overhead costs associated with farming. But again, with a changing climate, things could get a bit more complicated.

A longer growing season means more time for plants to grow or even planting a second crop. That can be good for a farmer’s bottom line, but it also allows a longer season for diseases and bugs often more native to the south to flourish. That leads to more spraying and added time and costs.

Oh, and some of those bugs eat more than plants. Mosquito numbers can also spike with milder winters.

“Warmer winters ... tend to in general extend the season for mosquitoes and make it easier for some of the southern species to move up,” says Michael Kaufman, associate professor of entomology at Michigan State University.

Our native species have adapted well to surviving the cold, but with a shorter winter, they hatch earlier and die off later, allowing their overall population to grow. Warmer winters also allow non-native species like the Asian tiger mosquito to move into the region. 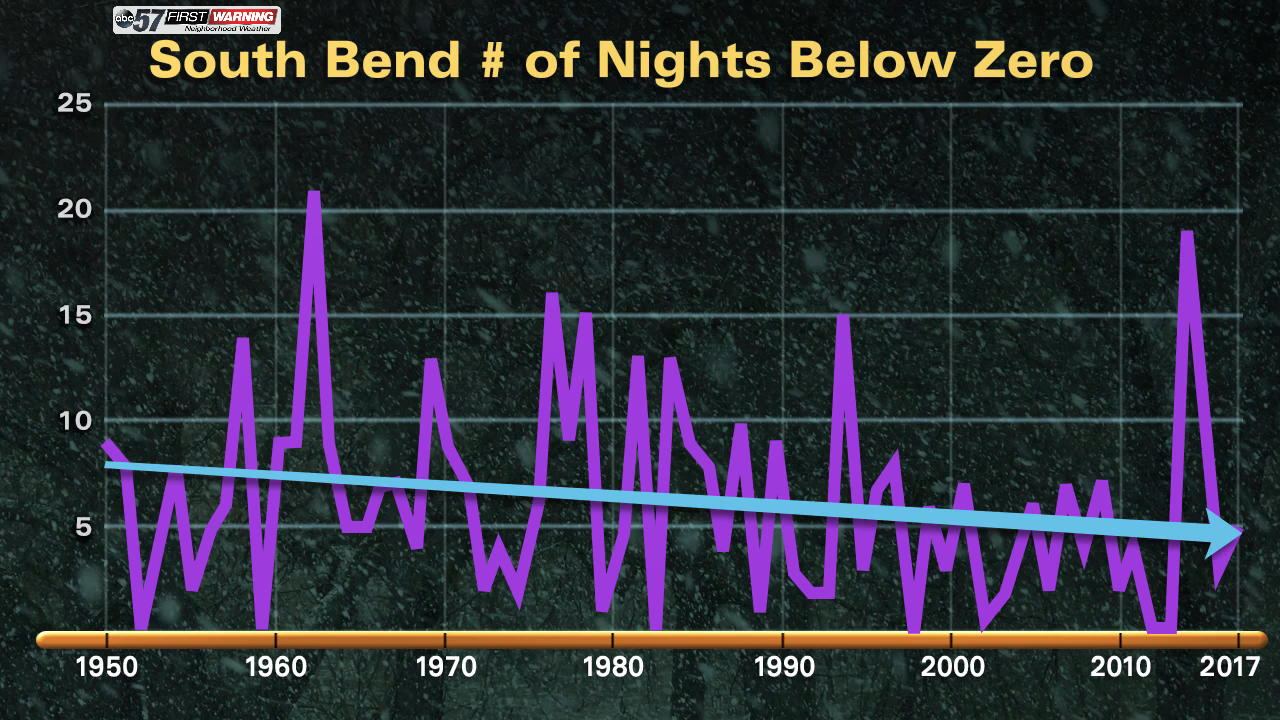 Mosquitoes can be more than just annoying. They can spread disease.

“There are some models that indicate that milder winter that we had 2016-2017 positively impacted the vectors of West Nile, again got them going a little earlier and bird/mosquito cycle a littler earlier,” cites Kaufman.

Spraying for mosquitoes may be something that we have to pay for more individually or with county or city tax dollars to control outbreaks. 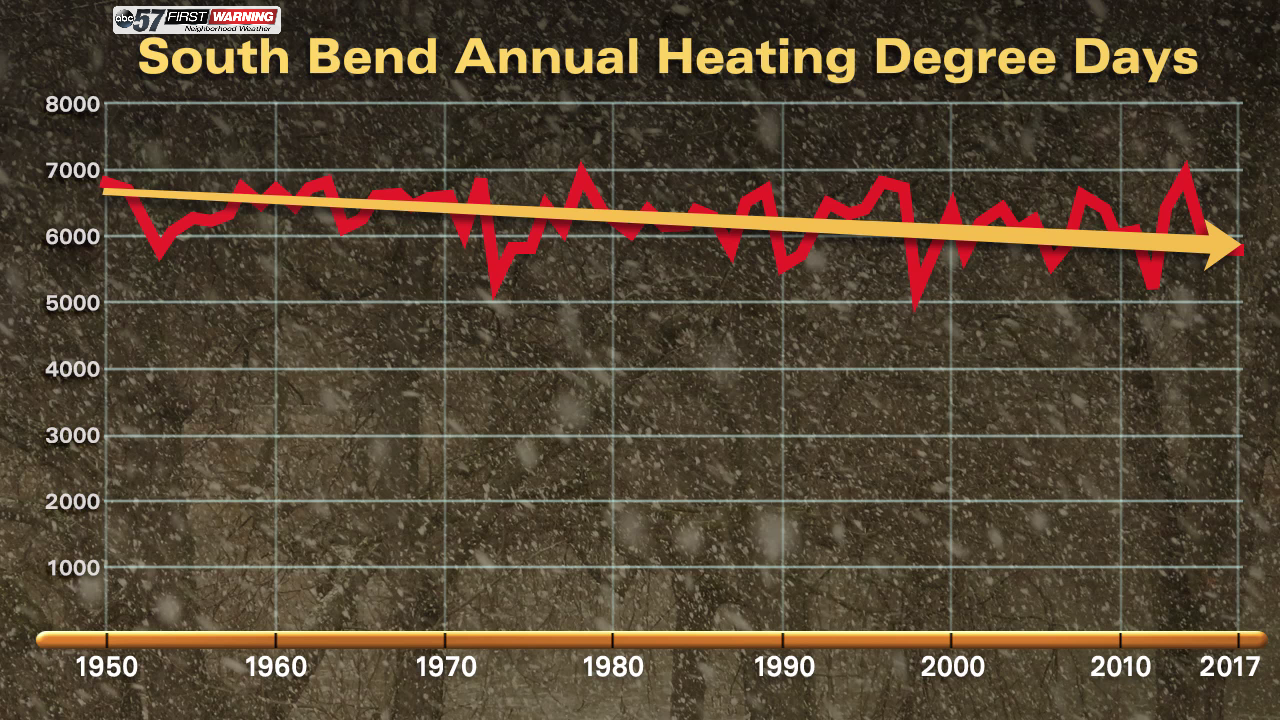 South Bend has seen a sharp decline in heating degree days but South Bend is not the outlier here—it’s the entire region. 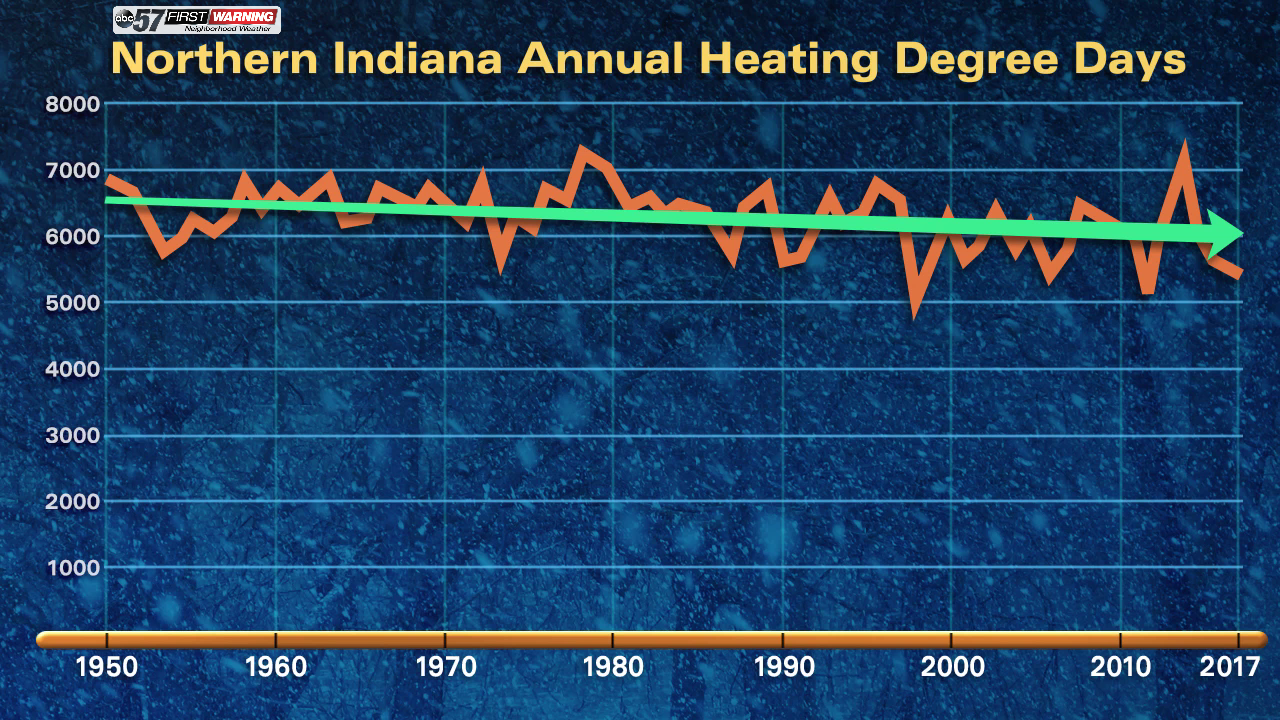 There’s plenty of proof winters are warming. It’s just one of the impacts of climate change and it’s happening locally. The question is: why should you care? The immediate outlook is not doom and gloom but it will mean a change from what we’re used to.

“Think of going from the Michigan I remember, lots of snow during the winter, cold winters, to something that's more typical of seasonality in Kentucky,” said Kaufman with MSU.

“It means finding something else to do in the winter time, making a little move,” said Coder.

We may all need to make a move and adapt to the cost of warmer winters.