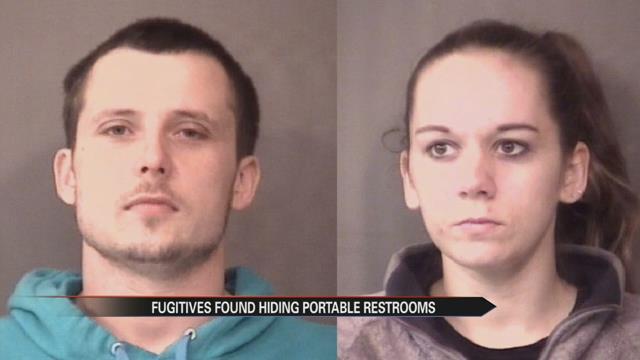 A Warsaw couple accused of stealing hundreds of dollars of electronics was captured by police after a foot chase Friday morning.

According to court documents, police had been searching for the couple since February.

Hannah Marie Brown, 23, and Steven Paul Gasaway, 25, were arrested sheriff’s officers after a call to a lawn full of portable toilets.

Around 10 a.m. police were called to a yard in Warsaw full of portable toilets for suspicious people.

Police say Brown stayed in the boat and surrendered to police, but Gasaway kept running.

He was quickly apprehended by officers.

A dog sniffed out the boat for weapons, but in the end, the couple was arrested without anyone getting hurt.

Turns out, there was a warrant out for both of them all along.

Brown and Gasaway are accused of corrupt business influence for allegedly stealing thousands of dollars worth of electronics from Walmart and Radio Shack.

They’re accused of taking a 55-inch TV from Walmart in January.

Documents say Brown distracted the door greeter while Gasaway rolled the TV out the door in a cart.

Police say they tried to do the same thing with another TV later that month, but were unsuccessful and left it in the store.

In February, they’re suspected of stealing a battery charger from Radio Shack.

Later that month, two HP computers and a Go Pro were allegedly taken by the couple from Walmart..