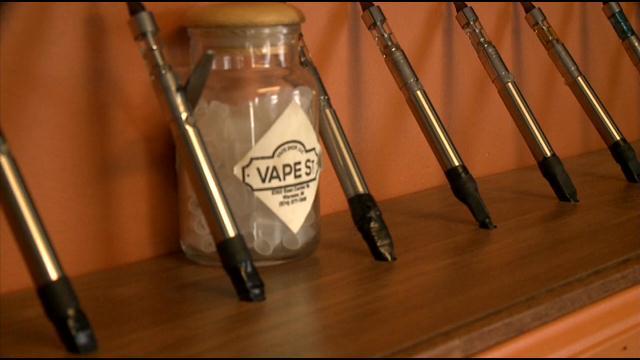 He said his goal was to open a conversation about a potential gateway drug.

“Nicotine is addictive, it's a habit forming drug,” Mayor Thallemer said. “If it's a little bit more attractive in a flavored form, I want people to understand that it can potentially lead to an addictive issue.”

While the two proposed vaping bills were addressed in the discussion, the mayor made it clear the town hall was less about policy and more about education.

“I think it's important that if someone goes into a store and buy something they know what's in [the product],” Mayor Thallemer said. “How it's enacted or enforced is another issue.”

The panel explained the potential risks of e-cigarettes and looked to encourage residents not to support this growing trend.

Miranda Spitznagle, Indiana State Department of Health's director for tobacco prevention and cessation commission, expressed concern over unknown long-term effects vaping can have on a user.

She argues those risks warrant tougher rules and regulations.

“As research continues to emerge, we do know enough to proceed with caution,” Spitznagle said.

Spitznagle made it clear her priority was the safety of the general public.

“Vapes” or e-liquid vaporizers shops are fairly new to Warsaw but vaping is increasing in popularity.

Local vaping shop owners attended the town hall in protest of the bill.

Vape Street Vapes is a local retailer and manufacturer of e-liquids and vaporizer products.

On the corner of Center and Market, this small shop's sign also carries a message of hope for smoking addicts.

Since its opening last year, George said her shop has helped many of her chain-smoking cigarette customers quit.

“I always tell them the thing to do is smoke, vape then nothing,” George said. “That's the goal, you don't want to be a vapor forever—that's not the point—but it's a nice medium to get off cigarettes.”

She believes strict laws could put her out of business.

In its current state, manufactures like Vape Street would be required to obtain a permit from the alcohol and tobacco commission, get safety certification from a security firm, pay an application fee of $1000 among many other tasks before the July 1, 2015 deadline.

“I'm already planning on around $5000 that I have to come up with even with the amendments,” George said.

And while safety has always been concern for her products, she thinks regulation is the responsibility of the owner and customers—not the government.

“We've put child-proof caps on, we're doing tamper-proof seals, we're labeling our bottles, putting warnings on there and not selling to anyone under the age of 18, so my thought is it's the consumer's responsibility.”

George did not get a chance to speak at the town hall, but was given the opportunity to hand in a written question to be read by the panel.

She believes this format was intentionally done to control the message.

While there isn't any word on when an official vote is set, George vows to let her representatives know: