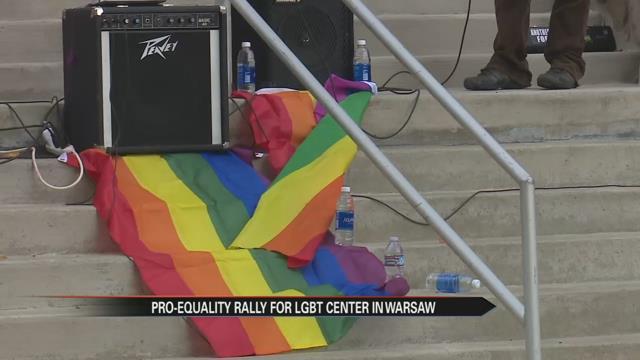 They called it a rally of love. The Pro-Equality Hoosier Rally held Saturday afternoon in Warsaw, promoted acceptance and love of marginalized populations, but specifically the LGBTQ community.

Marena Moonflower was one of the dozen people that attended the rally.  She and the others stood together for one wish and one goal.

Jeff Bridge co-founded the rally.  He says inspiring and helping others is his purpose.

He is a Warsaw native, but moved to Colorado not too long ago.  He returned Saturday afternoon with a mission to make his hometown a better place than it once was.

Supporters came together, because that's what they felt was necessary.  Moonflower attributes it to the fact that there's a lot of hatred and violence towards members of the LGBTQ community, and that they need the extra support.

And although attendance was low, spirits were high. As people gathered to show love for their town, and for all its people.

"We're trying to tear down walls, not build them up in this community," says Bridge.