It may sound odd, but yes, there is a such thing as waterspout season on the Great Lakes. It's a period in late summer and early fall that features significantly more waterspouts than any other time of the year. 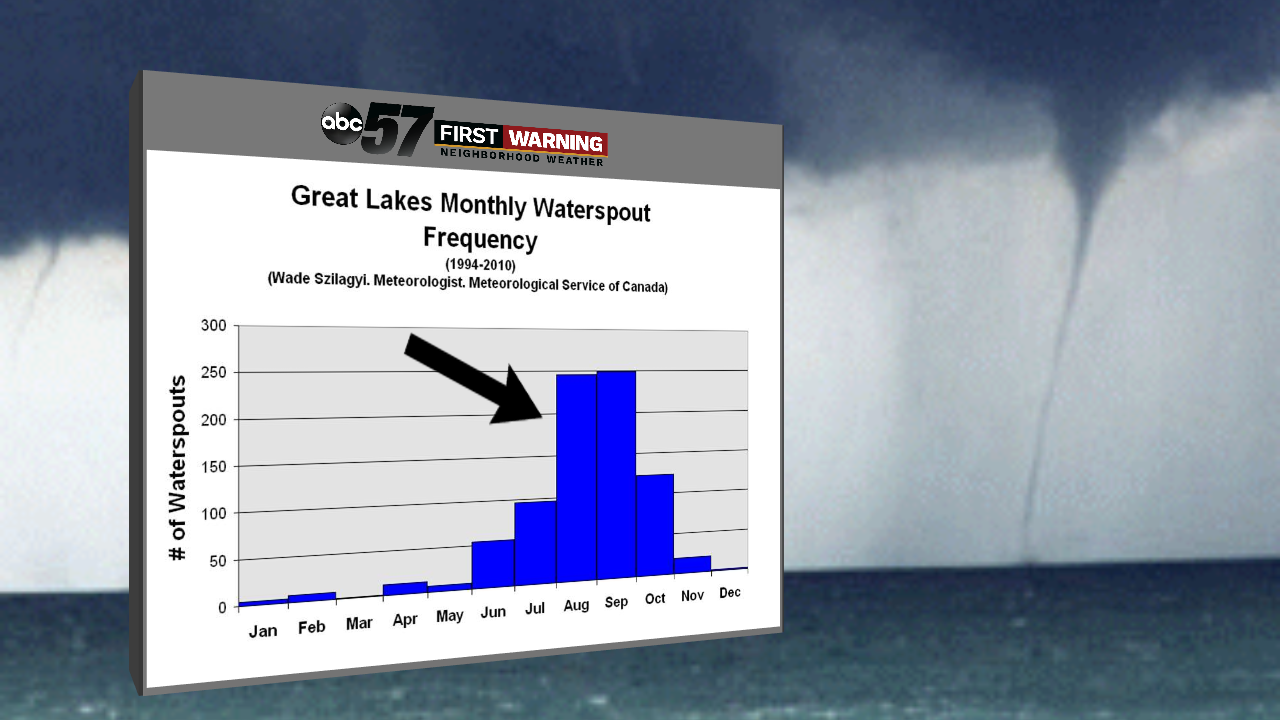 Waterspout frequency on the Great Lakes rises in the late summer and early fall due to mainly non-tornadic waterspouts.
The increase in waterspout activity during this stretch is rather eye-popping. The stretch being referred to is from late July thru mid-October.

It's the time of year when the Great Lakes have the warmest water temperatures, and the frequency of cold fronts bringing cold air to the region rises.

Those are the two components vital in the formation of non-tornadic waterspouts. According to the National Weather Service in Gaylord, Michigan, "Waterspout formation typically occurs when cold air moves across the Great Lakes and results in large temperature differences between the warm water and the overriding cold air."

"They develop at the surface of the water and climb skyward in association with warm water temperatures and high humidity in the lowest several thousand feet of the atmosphere," according to the NWS. 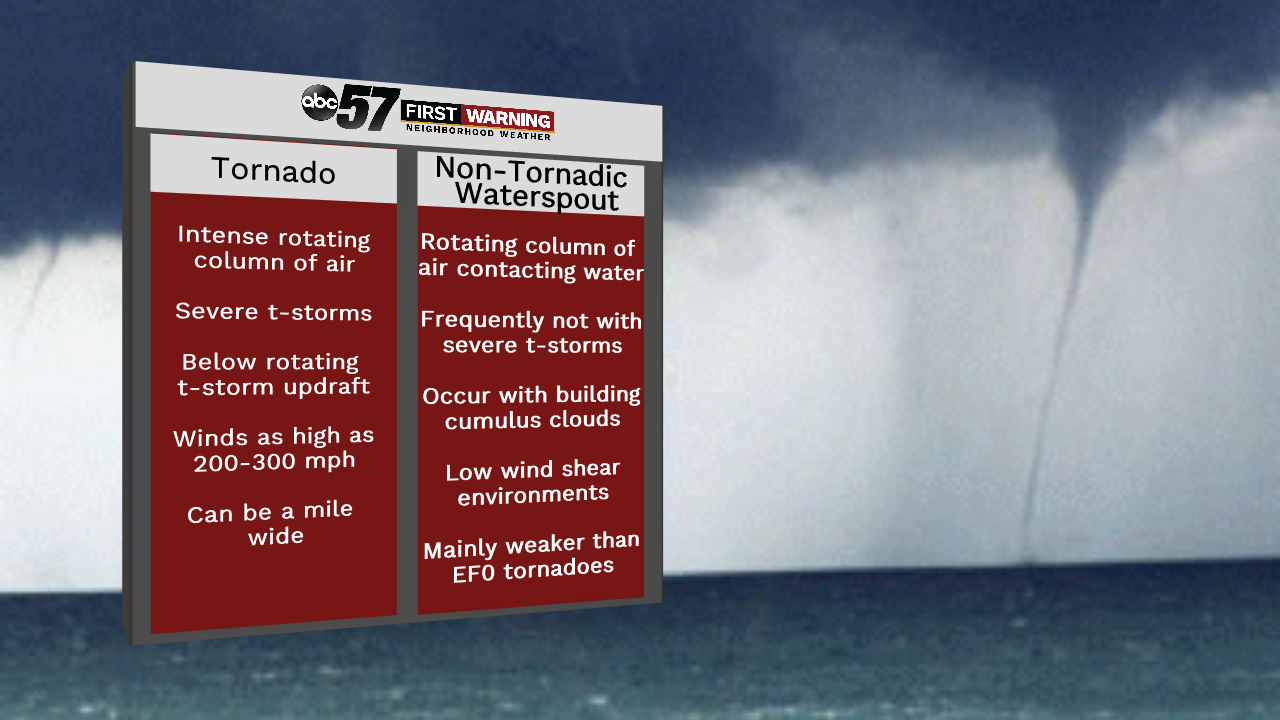 That is the recipe for non-tornadic waterspouts, which are the ones we see most often on the Great Lakes. Believe it or not, they typically form from plain old showers that are non-severe, or from building cumulus clouds without any rain at all. This is unlike tornadic waterspouts, which form just like a tornado would over land. Those are on the rarer side and don't have a specific "season."

Another name for non-tornadic waterspouts is "fair weather waterspouts." This is for the simple reason that, as mentioned above, big thunderstorms are not needed for their formation.

These waterspouts rarely move onto land, and when they do, they typically don't cause much in the way of damage.

"They are usually small, relatively brief, and less dangerous. The fair weather variety of waterspout is much more common than the tornadic." 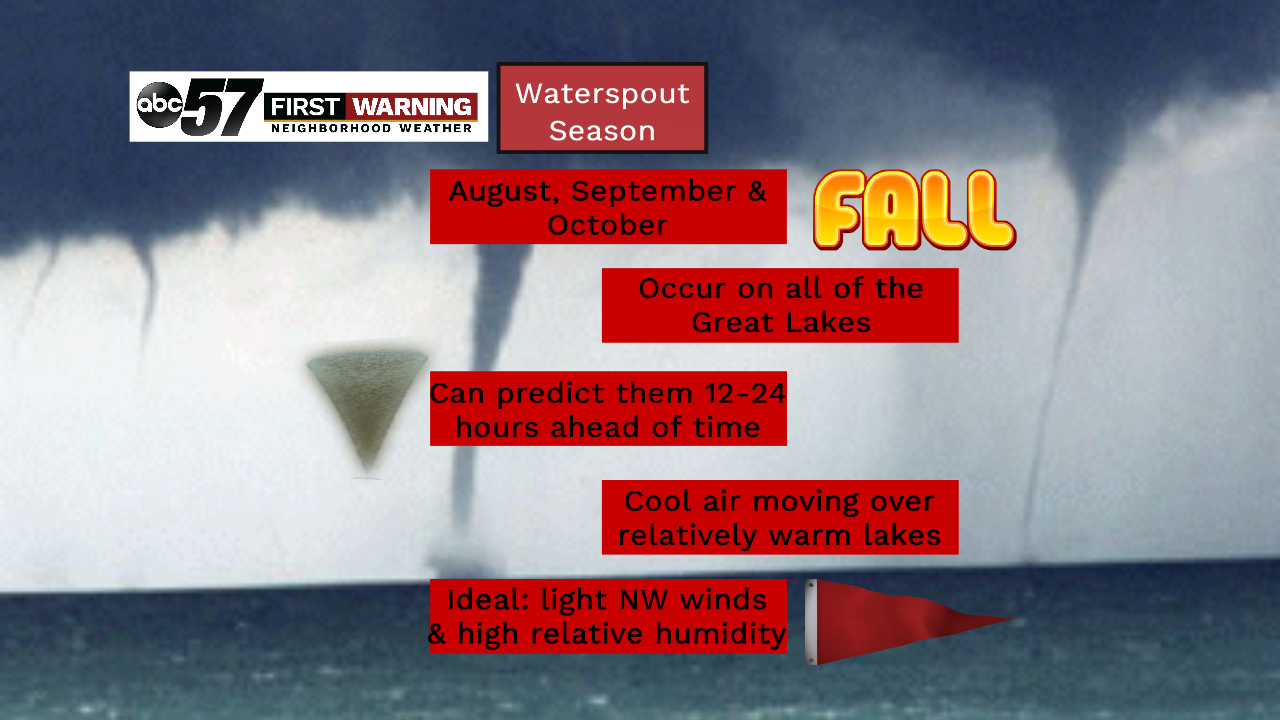 When they do form, they only last a few to several minutes. It's important to take them seriously, though, as they can make for dangerous conditions for boaters and persons on the beach.

Dr. Joseph Golden, a waterspout specialist with the National Oceanic and Atmospheric Administration laid out five stages of the formation of these waterspouts:

Unfortunately, predicting these waterspouts is not a solidified science yet. Meteorologists can predict whether or not conditions will be supportive of fair weather waterspouts up to a day beforehand.

They look for relatively warm lake temperatures, cold air moving in behind a front, light winds, and high moisture content in the lower atmosphere.

While they are not issued every day, the International Centre For Waterspout Research does put out a Great Lakes waterspout forecast during the summer and fall months that you can check for yourself at the link here.