Weather blast from the past 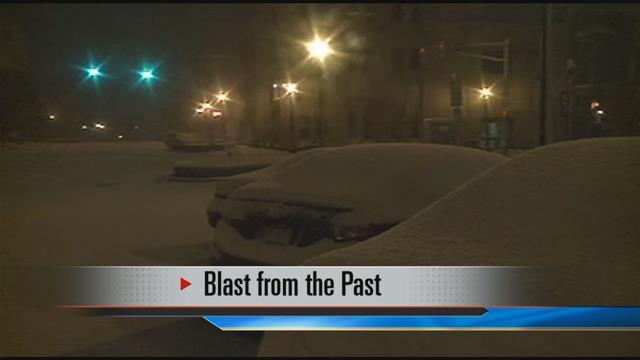 From lake effect snow, to arctic cold snaps, to 70° highs, to near hurricane force winds, November in Michiana is a whirlwind of weather phenomena.  Looking back at the past two Novembers in Michiana shows it is not uncommon for strong storms to rip through year after year.

We're now marking the two year anniversary of the lake effect snow event that occurred on November 11 and 12, 2013.  The arctic cold front coupled with a relatively warm lake and a northerly wind spawned the snow band that dumped nearly a foot and a half of snow in St. Joseph, Michigan with snowfall rates of at least two inches per hour.  However, just 10 miles east of the heaviest snowfall, they only saw a dusting.  The snow band only impacted Berrien, La Porte, and the western most parts of St. Joseph County, Indiana, but the bone-chilling single digit wind chills were felt by everyone in Michiana.

Now, let's flashback to November 13, 2014.  This was another instance of lake effect snow caused by a cold arctic air mass passing over the relatively warm waters of Lake Michigan.  The difference between this storm and the one from 2013 was the wind direction.  The wind set-up out of the northwest.  That slight change put the bulls-eye on South Bend.  The snow band dumped 12.3 inches of snow in the metro area, not only breaking the daily snow record, it also topped the monthly normal snowfall in only a six-hour period.  With that much snowfall in a short period of time, the bypass was shut down between US-20 and SR 23 due to numerous slide offs and accidents.

Instead of snow, this November's fall storm is categorized by its damaging wind gusts, snapping trees and blowing over power lines, branding it the "Witch of November."  Slightly colder air moves in for tomorrow and the wind subsides for the weekend.  For now, we are sparred from the lake effect nightmare from the past two Novembers.  As always, stick with ABC57 News for the latest updates on your weather forecast.