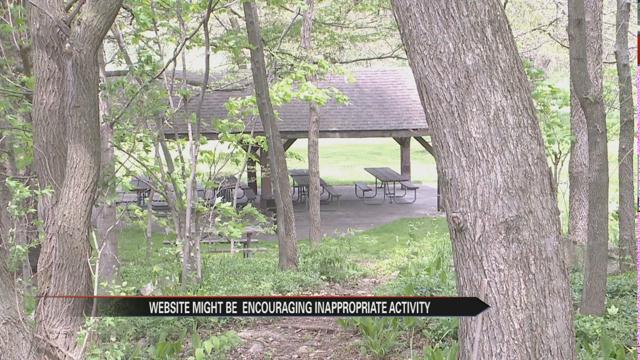 Police may need to step up patrols in a Michiana park because of a website that gives people information on hook up locations and tips on how to get away with it. All locations are public places like Benton Park in Goshen and Baintertown Park in New Paris.

The website ‘Cruising Gays' lists five locations in the Goshen area all considered to be ‘hook up' spots. The website is similar to any other social network where people can make an account and volunteer personal information.

The Elkhart County Sheriff's Department says this kind of website is not criminal but that does not mean the crimes it endorses aren't.
Elsie Stevens of New Paris says she visits Baintertown Park from time to time.

“I do come here off and on,” says Stevens.

Baintertown Park is listed as one of five hook up spots in Michiana.

“It's terrible because indecent exposure is a criminal offense,” says Stevens.

Stevens can hardly believe that the website list tips and trick, like watching for neighbors and fishermen, in order to get away with hooking up in public.

Officers say the website in and of itself is not criminal.

So when new indecent exposure cases from parks listed on this website start to happen like the one in Benton Park on Wednesday, the only thing that can be done is step up patrol and conduct operations.

“It happens everywhere, like I've heard it. I lived in Indy, and in Warsaw and they said it's happened. I just heard about it from everywhere,” says Roe.

Since the operation conducted by the Elkhart County Sheriff's Department last year at Baintertown Park, Captain Bradberry says the only reported indecent exposure act in a park was the one filed at Benton Park earlier this week.

The sheriff's department is investigating that case and will increase patrols if needed.