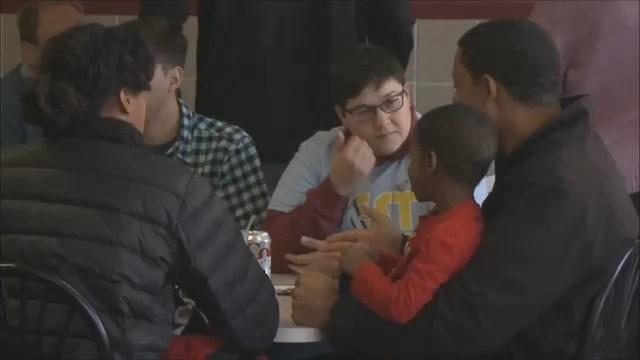 Everybody loves to eat right? Well local event organizers just celebrated an anniversary of eating, networking, and having fun and they took it back to where it all started in one small place.

It was West Side Wednesdays in South Bend.

“We started west side Wednesdays a year ago this month as a way to just get people to come and try a new restaurant and then network with other people,” said Sam Centellas, the Executive Director at La Casa de Amistad.

“Our challenge has been, we get so many people for lunch we actually pack a place,” said Centellas.

It was Kamika Perry’s first time at West Side Wednesdays and she and her family went for one reason:

“Network with the businesses and the people that are doing things on this side of town,” said Kamika Perry, a first time visitor of West Side Wednesdays.

She says it’s the set up that works for her.

Kamika Perry “I’m more of an introvert than an extrovert, so this is like one of the easier, more intimate ways to network.

And she got more than she expected…

Kamika Perry “I would do it again. Mostly because I’m a big like, I love food and so this is like a big bonus for me. And I get to talk and meet people so you can’t really lose.

Including peace of mind.

The next event is a "Holidays on the West Side" festival on December 10th. Organizers say free activities for families will be available for those in the community.

You can find more updates to West Side Wednesdays by checking with La Casa de Amistad, a local non-profit organization.