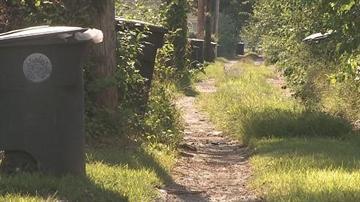 All five-year-old Tianna Miller wanted to do was play at the park on the corner of Olive and Westmoor Street. That couldn’t happen though, because the city removed all of the swings, merry-go-rounds, and even half of the tennis courts, leaving behind an empty patch of dirt and an old drinking fountain that doesn’t work.

Tianna is confused by the park’s disappearance. “Everybody used to enjoy the park and stuff, and I want to know why they moved it,” said Tianna. Her mother, Terraca Miller is just as upset.  “It’s awful, because the kids have nowhere to go, nothing to do, but to hang out on the side of the streets,” said Miller.

Nearby, Kennedy Intermediate Academy is surrounded by a black iron fence. A playground can be seen, but it too is behind a locked chain link fence. No trespassing signs are hung warning people not to enter.

Henry Davis, Jr. the South Bend Common Councilmember for district two says, the security fences give off a message to the people living in the area that they are not welcome. “If we’re providing [kids] with a presentation that says, we don’t care anything about you, what do you think is going to happen? It’s showing itself right now with the violence that’s plaguing the community,” said Davis.

Showing ABC 57 around his district, Davis pointed out several areas where simply city services don’t appear to be up to standards. Alleyways choked with overgrowth and full of potholes, are a concern for Davis. “One of my biggest concerns is that we’re living a substandard life in some of our areas within the second district,” said Davis.

Terraca Miller agrees with Davis, and thinks the city is not doing a good enough job on the west side. “I feel like [city officials] don’t care. The people don’t care. I mean it’s sad to see this. We are missing more things than we should have over here,” said Miller.

Meanwhile, the Davis continues to try to raise awareness about the situation in his district in order to obtain those missing amenities. “We feel like there is a lot of neglect, a lot of despair, and as more we speak out and talk about these things the less and less we actually get,” said Davis.

That is why he is inviting council members to come see the situation for with their own eyes. He is offering to give them a personal tour if need be, in hopes of winning some support for the causes he is championing in council chambers.