What city leaders say they are doing about violence 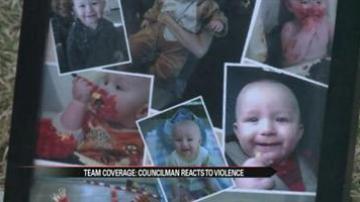 SOUTH BEND, Ind. -- The city of South Bend has seen six homicides since the beginning of 2014. The latest victim was 2-year-old John Swoveland Jr.

Common Council President Oliver Davis said the city is addressing the issue and stepping up to put an end to the violence.

The murder of baby John has stunned South Bend.

The toddler was playing outside when he was shot by a stray bullet.

Currently, no one is in custody for the crime.

Thursday’s vigil to remember a little life was also a platform for residents to ask what city leaders are doing.

“On the surface, people who complain in the barbershops and complain other places, you all are not doing anything, from the way they’re looking at it and right now with the situation out there, I can hear their pain. Because it’s scary,” Davis said.

However he said things are being done, they just might not be noticed.

That could mean more police officers on the streets, better equipment and technology to fight crime.

“These are city dollars we’re putting into making sure our public safety is taken care of. Will that prevent every crime? The answer sadly is no. Can that lessen a lot of crimes? The answer is yes," said Davis.

He also wants to make city offices more accountable for the funds that are being utilized.

Because while he believes the violence is now out of control there is a bit of light at the end of a very dark tunnel.

“Crime on a large basis is still down. But baby John is dead. So when you say statistically we’re okay. That does not bring Baby John back,” Davis explained.