What does the crisis in Iraq mean for Americans? 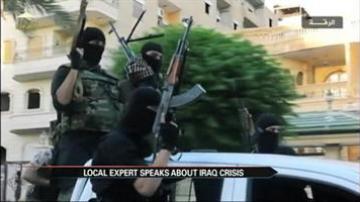 SOUTH BEND, Ind. -- Obama is sending 300 military advisers to Iraq to help train Iraqi security forces during this crisis. A foreign affairs expert at St. Mary's College spoke to us about what this crisis overseas means for Americans.

Images show the current crisis in Iraq. A radical militant group is rebelling against the current government, the same government US troops fought to establish.

"I think right now the president and a lot of Americans are asking the question, can we really make things better or are we likely to simply make things worse?" said Marc Belanger, Ph. D., Associate Professor of political science at St. Mary's College.

According to Belanger, President Obama is sending hundreds of military advisers to Iraq so that he can get a better feel about what will arise from the conflict on the ground.

"Once the Sadaam regime failed, the challenge for the United States was to help put in place a government that could help govern the whole country and they were not successful in doing that," said Belanger.

Families of soldiers who served in Iraq are left wondering what the fighting was for.

"The groups that are fighting against the government in Iraq right now are the groups that if they became stronger could potentially threaten the United States but right now their goal is to take territory," said Belanger.

According to President Obama, America's national security is the top priority, but right now there's no clear answer as to how to resolve the fighting in the middle east.

"That's one of the lessons so often in these conflicts that as long as you have an unpopular government politically, military solutions to what's fundamentally a political problem, are not likely to work for very long," said Belanger.

While Obama stated we will not be putting boots on the ground he says he will consider air strikes as a possible option.