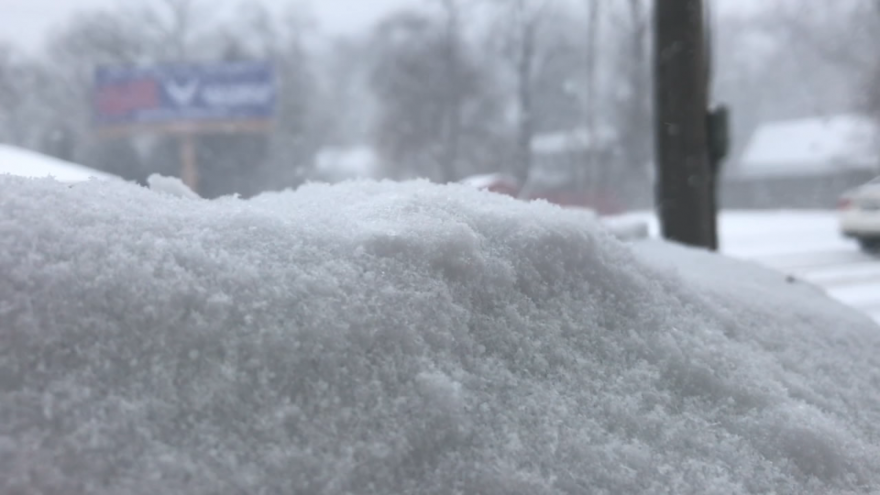 (CNN) -- Lake-effect snow has been in the news lately, thanks to a 65-inch snowfall that blanketed Erie, Pennsylvania.

But people who live outside the Great Lakes may well have never experienced this weather condition. The Great Lakes is the only place where it happens in the United States, except occasionally at the Great Salt Lake in Utah, CNN meteorologist Brandon Miller said.

So what exactly is lake-effect snow?

Miller said it happens when very cold, windy conditions form over a not-so-cold lake. The lake might be 40 degrees, he said, and the air zero degrees.

"That differential in temperatures creates some instability and the water provides a moisture source," Miller said. "When it gets over land, it deposits water vapor as snow."

Lake-effect snow generally doesn't fall over the water because it needs the friction and topography of the land to bring out the snow.

Winds usually blow west to east in the Northern Hemisphere, so the lake-enhanced snow is pushed to the eastern side of the Great Lakes, Miller said.

Lake-effect snow can be very localized, especially when hills and mountains can cause these little weather systems to stall out and deposit a lot of precipitation in one spot.

"You can have 20 to 30 inches of snow, and five miles away only a couple of inches," Miller said.

The National Weather Service webpage on lake-effect snow says that "wind direction is a key component in determining which areas will receive lake-effect snow. Heavy snow may be falling in one location, while the sun may be shining just a mile or two away in either direction."

Upstate New York and the cities of Rochester, Buffalo and Syracuse are the hot spots -- maybe they should be called cold spots -- for lake-enhanced snow in the United States, Miller said.

That area is located east of Lake Erie and Lake Ontario, which have a more east-west orientation than the other Great Lakes. That means there's more time and distance for the lake-enhanced snow to build up, Miller said. In meteorologist lingo, that's called a longer "fetch."

Lake-effect snow can pile up with amazing speed. In Erie, 26.5 inches fell on Tuesday, making it the second snowiest day in city history, behind Monday's 34 inches.

"This is like nothing I've seen in my entire life," said 10-year resident Richard McCarty. "I've always lived in places with a lot of snow. People aren't leaving because they can't. It's like you're on a muddy dirt road out there, but its all snow."

The snow was so deep that the Erie Emergency Management Agency went on Twitter and asked residents to lend a hand. "Can't see the fire hydrant in your neighborhood? Neither will the the Fire department. Be a neighborhood hero and shovel it out."

The lake-effect snow warnings for the Great Lakes were all scheduled to expire by Thursday, according to CNN meteorologists and the National Weather Service. Miller said another cold front expected in the next day or two could create more lake-effect snow, but it's difficult to predict where.

The incidence of lake-effect snow tends to decrease as we get deeper into winter, he said. The lake water becomes colder and and there's less differential with the air temperature.

Lake Erie often freezes over, being the smallest and shallowest of the Great Lakes. "If the lake freezes, the lake-effect machine effectively shuts down," he said.

The Great Salt Lake sometimes produces lake-effect snow, but not much because it's not as big as the Great Lakes.

Japan suffers through something even bigger and badder than lake-effect snow: Ocean-effect snow, with the effects amplified because of mountain ranges.

"You can see one hundred inches in a week from the ocean-effect snow," Miller said.